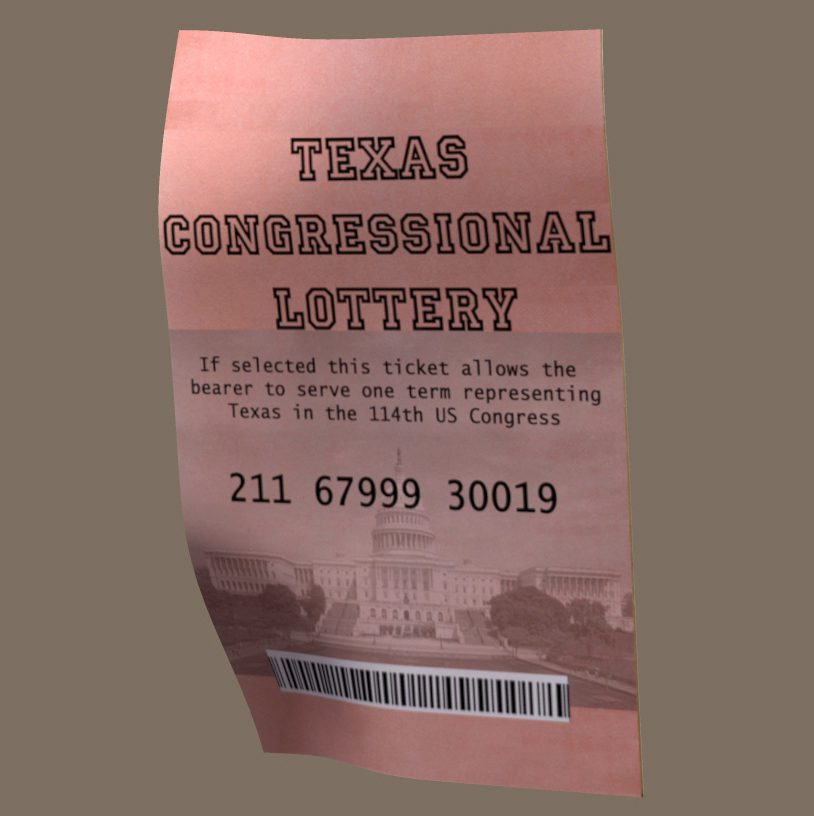 Sequestration or not, every member of Congress should be deeply ashamed of the service they’ve given us getting here.  Many people have advocated getting rid of incumbents, term limits, campaign spending limits. I would like to offer my own solution.

I believe I have a plan that restores Democracy, brings back the idea of independents, provides significant funding for the states and even puts money in the hands of the people.

I propose that we give one lottery ticket, err, vote to each registered voter. We then hold a drawing to see who represents us in Congress.  The winners get to spend a term in Congress and of course become eligible for the lifetime retirement benefits of Congress.

We can more dimension to this plan by giving each voter the option to buy 10 more votes for $1000 each and allow them to sell or donate their votes. Want to support your party? Just give them all your votes. Want give yourself better odds of being elected? Buy more votes.

Texas has approximately 13.6 million registered voters. At $1000 a vote, times 10 votes, times $13.6 million, Texas could rake in $13.6 billion. Each voter could make at least $1000 and depending on the current price of votes, could make significantly more than that. A well contested race could put a serious dent to poverty in Texas.

No more problems trying to get people to register to vote, this would be all the incentive they need.

This is about the time you tell me the plan would put an end to political parties. I disagree. The parties will still exist. They will still be spending money to buy all the votes they can for their candidates and for the most part they will still win. Even better, now every once in a while an independent will win.

Huge income for the state, reasonable income for individuals, the parties still control the majority of candidates, and minorities have a chance of winning. This sounds better and better.

Wait, what’s that you say? This would make a mockery of our election system?

I think that ship has already sailed. Considering our current situation, can you honestly tell me that this plan would make things worse?

501(c)(4), Which Part Is The IRS Violating?
Lower Gas Prices And 100 MPG The Congressional Way
School Funding, Some Skin in the Game
Using 1040 Advertising As A Revenue Stream, Why Not?