The Martian Notifier, Another Smartwatch? 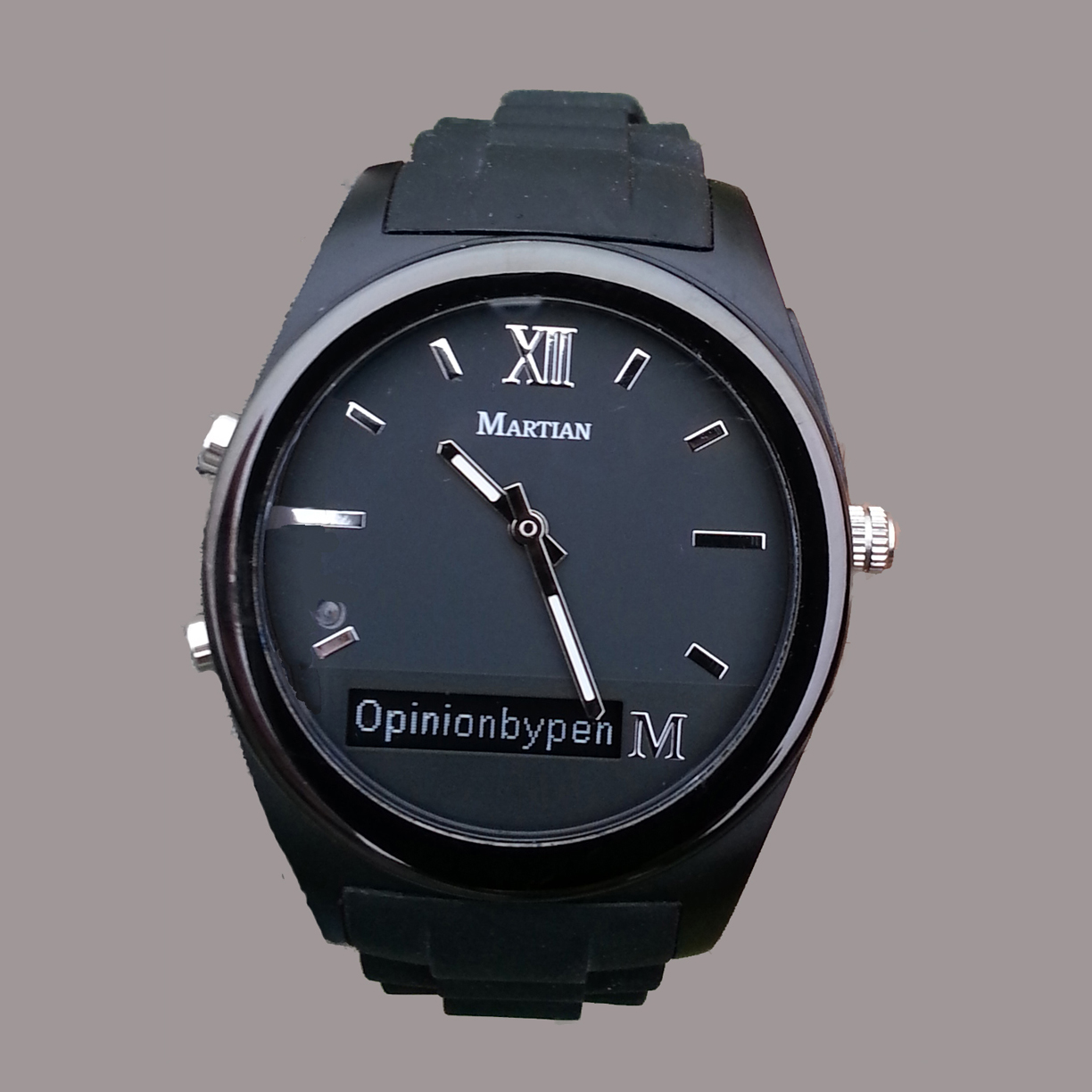 In today’s world it’s a given that in every large gathering of people somebody’s ring tone will blare out. Choosing not to be that person, I try to always keep my phone on vibrate. Only two problems with that plan, because I keep my phone in a holster, I don’t always feel it and worse, since my Galaxy doesn’t allow me to lock these settings, it sometimes slips past vibrate into silent. Once that happens I miss everything. It was obvious I needed a Smartwatch.

This week, solely as a service to my loyal readers, I’ve been wearing the Martian Notifier Smartwatch. Please don’t think it was a case of technolust that forced me to run out and buy this watch. Please realize that despite my wife’s firm beliefs to the contrary, I can pass up products alluding to have ties with alien cultures. And for the record, my purchase of the watch had nothing to do with my wanting a silent alarm watch like James Colburn’s ever since I saw Our Man Flint.

Mind you, I purchased the Notifier before Apple announced their Smartwatch but I’m still not ready to trade my Galaxy in for an iPhone.

I chose the Martial Notifier because of all the Smartwatches on the market it looked the least Geeky. I did my homework by reading a number of reviews but even the reviews seemed confused on what the Notifier did. The big clue is in the name, it notifies. If you want anything else, you need to look elsewhere. Best Buy decided to end my indecision by discounting the Martian Notifier from $129 to $99. This was obviously a sign from the  gods of Technology. 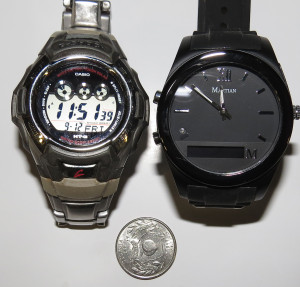 Watches shown with a quarter as reference

Exact time is an obsession for me. Don’t ask me why, it’s a part of the way I’m wired. My former watch was a Casio Atomic that was updated to the exact time on a daily basis. The only drawback was size, it’s a big watch. It should tell you something then when I say large size was my first impression of the Notifier.

Let me go directly to the bad. I was stunned when I realized there was no sweep seconds hand. I realize that this isn’t an issue for 99% of you but I was disappointed. Then I realized that the analog portion was completely isolated from the rest of the watch. If I want exact time I have to select the digital display that ties me to the cellphone network. Only a few extra motions but for me this was a big downgrade in exact timekeeping. My relationship with this watch was looking very brief.

After considering how short this review would be if I did not give the watch a try, I decided to give it a fair chance and that’s how I decided I might keep this watch after all. 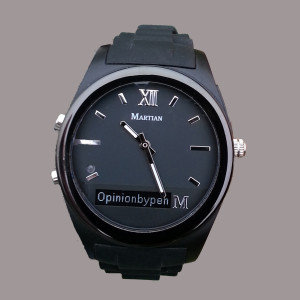 As I said, the Notifier notifies you of events happening on your phone. It does this by using a Bluetooth link with your iPhone or Android phone and vibrating a specific codes for each event, flashing an LED and displaying text on a small, twelve character, scrolling display. Each alert has four elements, each element can be a long vibration, a short vibration or a pause (no vibration). For example, I could set incoming calls to be short, short, pause, long and text messages to be short, short, short, long. For those of you not doing the math, that’s 54 unique codes.

The current app has a number of preset codes for your mail, incoming calls, text, calendar events and so on. The app allows you to reprogram any of these codes if you don’t like the preset. This was also one of the places where the Android version and the iOS versions differed. The Android version has a default alert that you could associate with almost any app on your phone. On the iOS version you are limited to alerts from specific apps. Neither app would allow me to associate specific codes with specific phone numbers. You still have to look at the display to see who’s calling.

The app allows you to set the vibration level, the LED activation and the behavior of the scrolling display. Considering the possibilities, I expect the manufacturer to continue refining the behavior of the watch. If you are considering buying this watch, I highly recommend downloading the app before you buy the watch. This will allow you to explore all the options before you commit.

One of the features on the Martian Notifier, I’ve been missing for the last twenty years. Back then, almost every digital watch made had an hourly chime. Great for people like me that tend to forget the passing of time. It was a great feature, until you were in a meeting with 20 other people. About five minutes to the hour, chimes would start going off for the next ten minutes. People never had the same time. The Martian Notifier brings that back, on a silent basis.

Other features include a leash mode (it warns you if you get too far from your phone) and a remote camera function that enables you to remotely snap a picture from your phone. I found it awkward but it worked.

One of the major complaints in all the reviews was the watchband. It’s a soft silicone strap with a buckle. I found it comfortable and realized that the intent was to keep it tight against your wrist. Put too much slack in the band and you’ll never feel the alerts.

The reviews also had cautions about the watch glass getting scratched easily and the watch only being water resistant not water proof. I decided not to test either of those features.

Okay after a grueling four days of testing, here’s what I discovered.

It’s not Apple’s Smartwatch, I have a hard time calling it a smartwatch at all. It’s a Notifier and works great for my purposes. It doesn’t shout geek but still has enough technology to make me feel good about wearing it. I’ll be keeping this watch.

First Thoughts on Flying a Phantom DJ3 Advanced Quadcopter
OTR Mobile, A Review
A Futuristic Design Concept, REPTILE
The Art Of Communication, Let Your Audience Dictate How You Say It