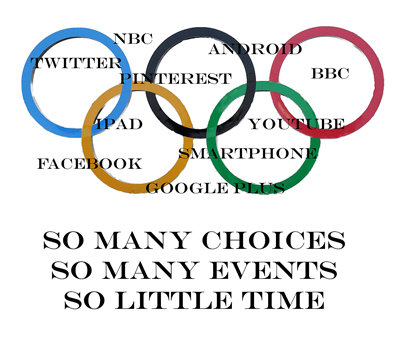 Every two years my wife starts building her media center for Olympic viewing. This consists of carefully looking at all the schedules, verifying that all the recording devices operate, verifying that everything is hooked up correctly and that we get all the channels we need to watch the Olympics. I see this as a perspective in the evolution of digital technology.

Her first Olympics with me were powered by a couple of VCRs, a wide screen TV with PIP and the bedroom TV on a cardboard box in the living room. We live in rural Texas so all of this was served by an S-band satellite receiver. As time went on, technology moved to DVD recorders and then to DVR’s recording directly to hard drive. My S-band antenna has been replaced by a DirecTV antenna and wonder of all wonders, dial-up was replaced by DSL.

Today I’m looking at my wife’s current setup. She has two monitors on her computer desk. She has her satellite receiver with built in recorder driving her personal TV on her desk.  She has her iPad with her constantly. She even has the NBC app on her phone and iPad. As soon as the BBC app is released in the US, I’m sure she will have that too. I’m sure she’s already set up all the Twitter feeds related to the Olympics.

As I look at this I have to wonder what impact technology is having on the Olympics. This year fans and athletes  have smartphones with direct connection to Facebook, Twitter, and  YouTube. The Eye of London will be illuminated by the mood of all the Twitter feeds. That’s impressive technology just to parse all the Twitter feeds. As I write this, I’m struck by the massive effort of making sure all those people stay connected. This is certainly not something that had to be considered by earlier Olympic Committees. I can only hope that the Olympic Organizers thought of it before I did.

In years past we’ve seen the impact of computers on training techniques, equipment, even the design of swimsuits. With the advent of social media, I wonder if any of the athletes will be competing with their geolocation on. If an athlete tweets ” I was up all night partying”, is he trying to give his opponent a false sense of confidence or preparing an excuse just in case their performance is not up to par? How do the coaches feel?  Does it help the athlete to instantly see all their support or is it a distraction.

As with its predecessors, this Olympic promises to be one of the most observed and recorded in history. The difference here is the magnitude. Now, if I want to watch fencing (my favorite), I’m no longer limited to 30 second clips of other countries  or 5 minutes worth of US fencing if we do well.  My wife can watch all the horse events (I will take flak for not naming them) whether or not the US is doing well.

Over the next two weeks my wife will be doing her best to watch just about every sport in her interest range. As near as I can tell that includes every event except Boxing. During those “down” times she will be searching out all the special interest stories on the athletes.

This brings me to one more issue in the information age, the impact on me. During this time my wife will be utilizing every bit of bandwidth our DSL lines provide, no gaming for me. She will become almost nocturnal because of the time difference. She will be trying to keep up on streaming video from at least 4 different sources. Talk about multitasking and its impact. I’m already starting to stock up on easily prepared foods because I have a feeling that her ability to concentrate on a single task will be greatly impaired during this time. I know I’ll be asked to bring food home many more times than normal.

Despite all of this I am looking forward to the Olympics. I’ve always admired the athletes and the sacrifices they make to compete at this level. I really enjoy the enthusiasm my wife shows for the events. If only they had curling in the Summer Olympics too.

A Look Back at Some of My Favorite Posts
Time Travel, We All Do It
Dragon Naturally Speaking , a User's Review
Email Scam or Luckiest Man Alive?