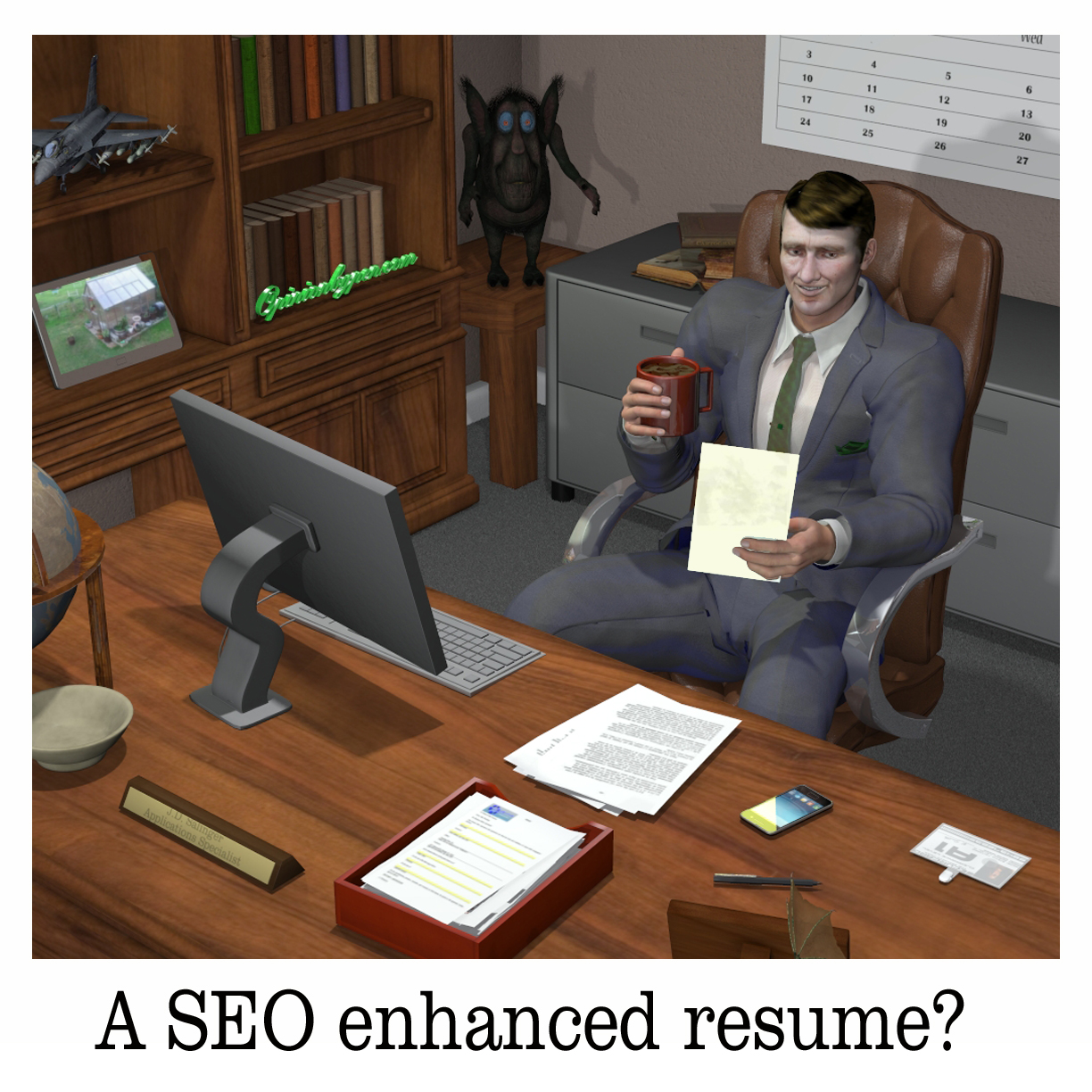 People tell us not to judge a book by the cover but we’ve all passed up good books because of poor cover art. If you think about it, your resume serves much the same function as a book cover and let’s face it, compared to our counterparts in marketing, most engineers write really poor resumes. You’ve probably seen a few dull of those resumes, boring and very factual. It’s hardly our fault. In every report we write, we’re taught to stick to the facts, don’t embellish, don’t make assumptions. An engineering resume makes for pretty reading. It’s even dull to another engineer, I can only imagine how it looks to a hiring manager. Still as the job market tightens, a few engineers seem to have picked up on how to write good resumes. You know, the ones people remember well after the interview. A SEO enhanced resume.

When a friend of mine asked me to look at his resume, I found it to be a perfect engineering resume, dull boring and factual. Not surprisingly, he was getting very few interviews. Let’s frame this thought, good friend of mine that I want to help and a problem resume. Aside from the fact that it’s been years since I last reviewed a resume, this was a problem I could solve.

I could have googled good resumes and gotten a wealth of differing opinions but since my friend’s current resume was created using professional help, I decided to try a different tack, one I was very familiar with, SEO.

SEO is Social Engineering Optimization and it’s used to affect how Google ranks your website. I’ve written about SEO before but really I use an analysis tool that gives me a SEO rating for each post. The nice thing about the tool is that it also gives me suggestions on how to improve my score. What this resume needed was a SEO boost and after three years of maintaining Opinionbypen, I felt I had a pretty good grasp on SEO.  It seemed perfectly reasonable to create a SEO enhanced resume.

Granted, there’s a lot of difference between a post on my website and a resume but in both cases we want to entice someone to pick our writing out of thousands of others and read our words. Having good SEO doesn’t guarantee success but not following the guidelines makes success much harder.

Let’s take a look at some good SEO techniques;

Being just a little liberal with the guidelines and applying them to creating a resume I get;

I think this concept has potential! The resume I was looking at never mentioned what position my friend was seeking. It gave a lot of good buzzwords but nothing to indicate what he had accomplished in his career and his resume certainly had no pictures. Three hours after reading it, I only remembered a few of the buzzwords.

I added a sentence to say what position he was seeking and put it right up front. Accomplishments are harder, for example while I’m very proud of my success at troubleshooting my 3D printer (without a schematic!), it’s unlikely that would get me a job as a system engineer. Fortunately, my friend had a number of accomplishments I could write about and in doing so the buzzwords became meaningful sentences. That left adding pictures.

I don’t think I’m alone when I say I’ve never liked my appearance. If you look through all the pictures on this entire website, you would only find one very small picture of me, concealed within a picture. Still, there’s no argument that we are becoming a visual society. Facebook, YouTube and even LinkedIn are all telling us to show our pictures. If the best picture you can dig up of yourself reminds you of Gary Busey after a three day binge, I agree with you, it’s better to leave it off. Otherwise, there’s no reason not to put your picture on your resume.

Only time will tell if my changes actually improved his resume and unfortunately like good SEO, it only improves his chances of getting to the interview phase. Landing the job is up to him but in a pile of dull boring engineering resumes, his SEO enhanced resume will definitely stand out and be remembered.

Let me know what you think. I’ll let you know if he gets a job. 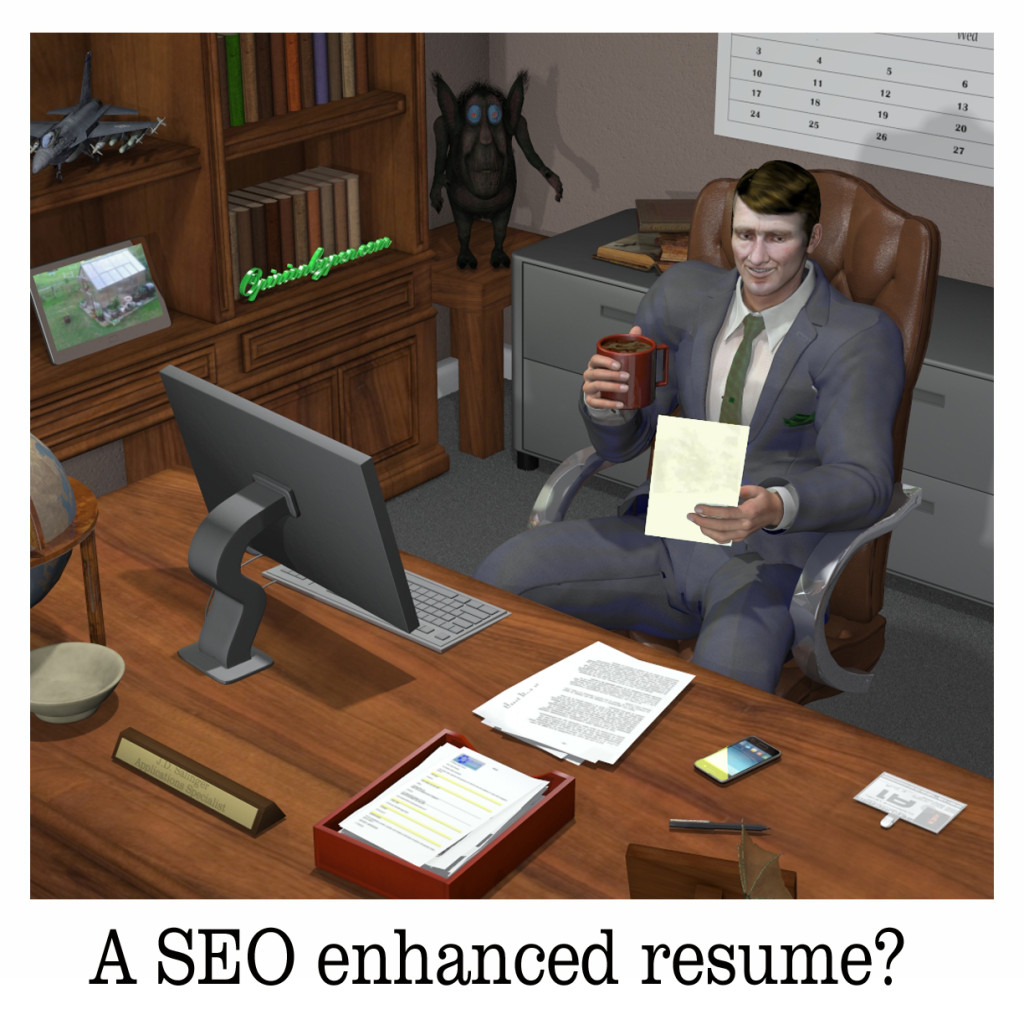 A Look At Class Action Suits Using the Google+ Settlement
Lifetime Updates and Lifetime Warranties, Scam Or Real Value?
A Question About Poor Customer Service
The Law of Resonance