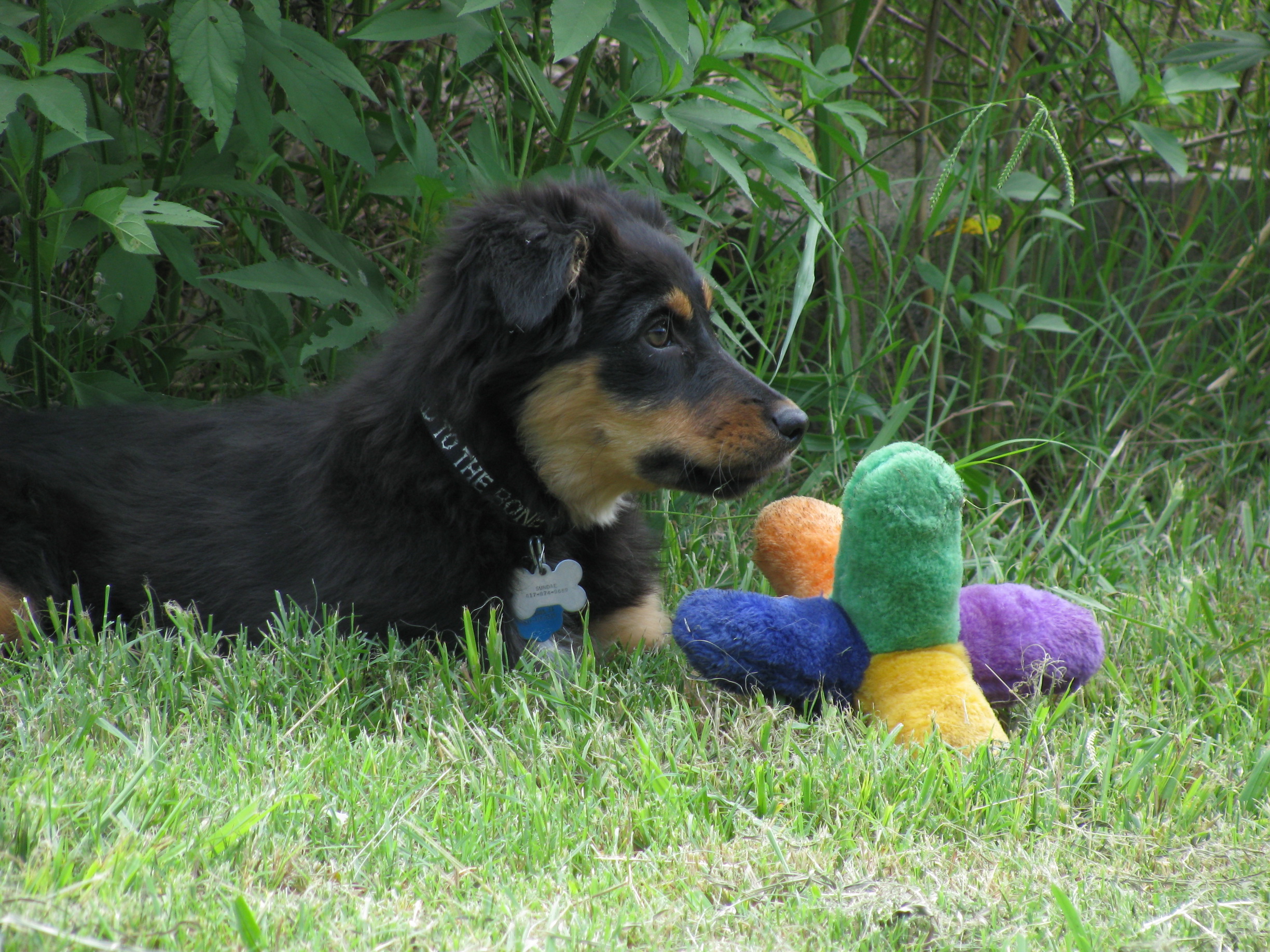 While I enjoy the company of our dogs I realize that their motivations are sometimes very far from what we ascribe to them. When we try to humanize their behaviors we often misinterpret instinct for personality.  At least that’s what the canine behaviorists tell us. I’m never quite as sure. Sundae is full of personality.  If you saw my blog in the early days, I used a picture of Sundae apparently in deep concentration over one of her toys. Sundae is the youngest of our pack. She celebrated her third birthday just a few weeks ago. Unlike Cajun, after she was weaned, she’s never known a home other than ours.

As a small puppy Sundae was never convinced that we were in charge. When she decided that she was bored, she left. Most dogs will do that if left alone, but this was while we were playing with her. That meant some long chases for me . I got to meet neighbors I never knew I had. Getting to the point of trusting her again involved several months with her only going out on a leash.

For some reason, Sundae was never into sharing. She would gather all the toys into one spot and guard them. Her favorite toy is a small football that she begrudgingly shares with me so I will throw it for her.

Speaking of toys, Sundae is fully convinced that I belong to her. As I said, she’s not into sharing any of her toys and that certainly includes me. When I come home from work, Sundae is the first and most enthusiastic to greet me. Whereas the others are hoping to talk me out of a dog biscuit, Sundae wants affection from me. The biscuits can wait.  She’s always happy to see me return home.

When she comes home after an Agility class or a show, she makes a beeline for my lap to tell me all about her day and for me to give her all the affection that she tells me no one else gave her. I know she’s lying but what am I supposed to do? Since she is being trained in Agility, the back of my chair presents no obstacles for her. I’ve learned to be ready for her.  At 30 pounds and high speed it’s not unlike being hit full force by a ball of pure energy.

Australian Shepherds are very smart with high energy. Being a herding dog,  Sundae wants to know where I am at all times and doesn’t like it when my wife and I are in different rooms.  She wants to be able to watch both of us at the same time. Like I said, all her toys into one spot.

When I spend too much time at the computer she will jump into my lap and tuck her head under my chin. She will usually spend 30 seconds very quietly and then push slightly as if to snuggle in. It’s obvious that I’ve been ignoring her. Once she gets some attention from me, about two minutes max, she will jump down. She just wanted to make sure I still knew who was boss.

I admit it, I’m a pushover for her wiles. I can tell myself it’s all instinct but at the end of a long day I don’t really care. Her enthusiastic greeting makes up for a lot of long boring meetings.

How To Get A Solar Powered Potting Table. Married To An Engineer
Rest In Peace Kindle Write On, I Hardly Knew You
Learning Through Analogy
Married to an Engineer - Part 3, Brussel Sprouts