When Did the Definition of Unlimited Change?

It always irritates me when I see commercials preying on our stupidity. I guess that’s why watching Sprint’s commercial extolling how their reliability is within one percent of everyone else, always results in my wife having to endure a rant on the difference between reliability and coverage. My lecture on the difference is usually cut short when she deftly changes the conversation to the wonders of Brussel sprouts as a breakfast food. I can take a hint.

Since you’re not in a position to affect my breakfast, I’m taking my rant to you. As a systems engineer, I’ve learned how important words are. We can assume that Sprint is defining reliability as how often their network is working. That’s certainly important when selecting a cell phone but it doesn’t have anything to do with speed, coverage or basic features. During the years I had Sprint, I encountered very few occasions when the network was down. This number almost equaled the number of times I managed to obtain a 4G connection. Did I mention I’m no longer with Sprint?

Reliability is not the only word Sprint is deliberately misusing in hopes of preying on our stupidity. A quick look at Google tells us that unlimited is defined as “not limited or restricted in terms of number, quantity, or extent.” Sprint seems to be using a different definition. When you read the fine print on their plan, Sprint defines unlimited as giving you 10 gig of data and then depending on network congestion, deprioritizes you to 2G speeds.

I don’t know what that means either but while speeds vary, 2G gets you around 300kbits/sec, 3G gets you about 500kbits/sec and 4G will get around 4 Mbits/sec. Speaking as someone getting 1.2 Mbits/sec at home, the practical difference between 2G/3G and 4G is watching YouTube videos versus watching the screen telling you it’s buffering. You can expect to see a lot of buffering at 2G. That’s certainly not what I would expect from unlimited.

Sprint is not the only provider misusing unlimited. Verizon defines unlimited as 20 gigs of data and then depending on network congestion throttling you back to 3G speeds. Better but I discovered there’s another factor to “unlimited.” As I mentioned in All I Want for Christmas, I have to use my cellphone as a hotspot in order to watch videos. Hotspotting at home has become a way of life for me. Five minutes of searching enabled me to find the fine print on Verizon’s unlimited data. Hotspotting on their unlimited plan is limited to 10 gig per month.

Much as I love my phone, Verizon knows that I’m probably not going to stream a lot of movies on a five inch screen. I guess I won’t be getting unlimited from Verizon.

AT&T’s “unlimited” gives you 22 gig before they throttle you back based on network congestion. They limit hotspotting to 10 gig per line per month. Better but still not unlimited. Still, AT&T was the only provider that didn’t make me search for the information.

Just to be fair, I looked up the unlimited offered by T-Mobile. They don’t throttle you back until you pass 30 gig.  Thirty gigs sounded much better than Verizon’s deal until I managed to find the fine print on hot spotting. T-Mobile doesn’t limit your hotspotting data usage, they merely limit your hotspotting to 3G speeds. Looks like T-Mobile “unlimited” is out too.

Misleading claims are not restricted to cellular providers. About twice a month I get an invoice suggesting that my website registration is about to expire. If I act quickly, it will only cost me $75. I lost my secret decoder ring a few years ago but with some effort I can determine they have nothing to do with domain name registration. They’re hoping I’ll pay $75 to register my website for their undefined SEO service. The only thing at risk of expiring is their offer of SEO registration.

I’m sure their offer is every bit as valuable as the offers I get to list me in the Who’s Who of Engineering Professionals. The sad thing is that as often as I receive these offers, someone must be signing up.

How often do you look forward to seeing “New and Improved” on your favorite product?  Come on people, we’re better than this. Take the time to read the fine print. Know the ad agencies are using a different dictionary than we are. New and improved does not mean the improvement was for your benefit. 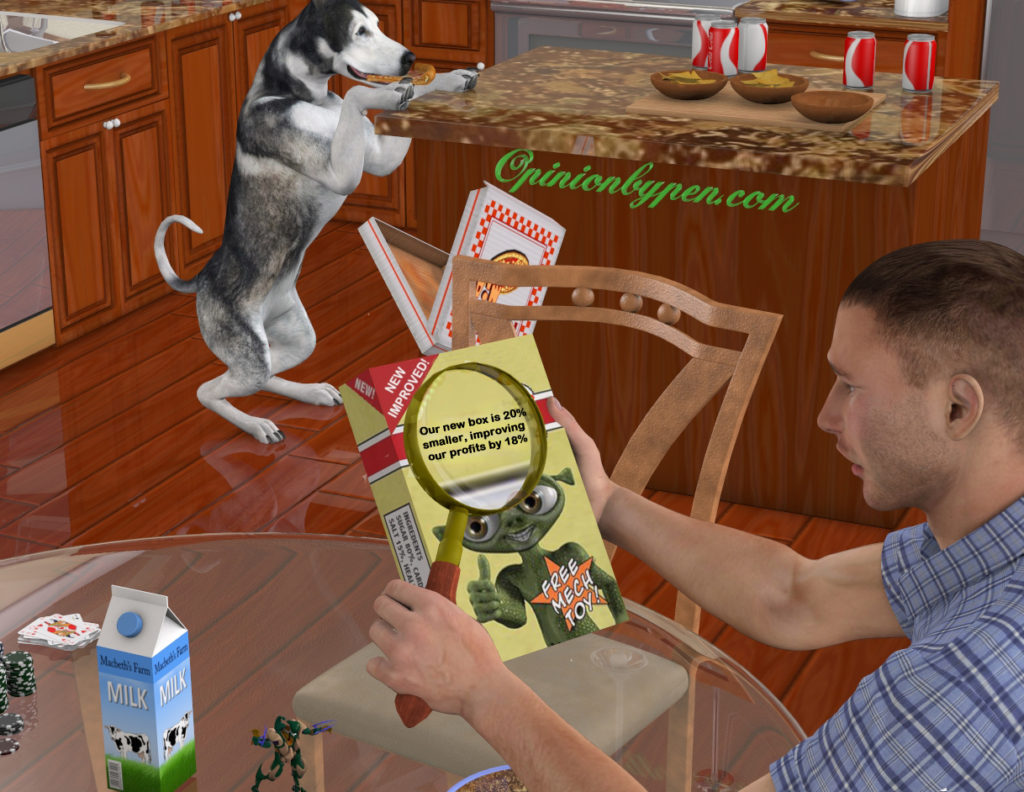 Why Does A Request For Advice So Often Result In An Argument?
Website Data For My Udacity Statistics Course
Married To An Engineer - Part 2
Why Would You Want To Write A Blog?