Why You Never Ask An Engineer, What Are You Thinking? 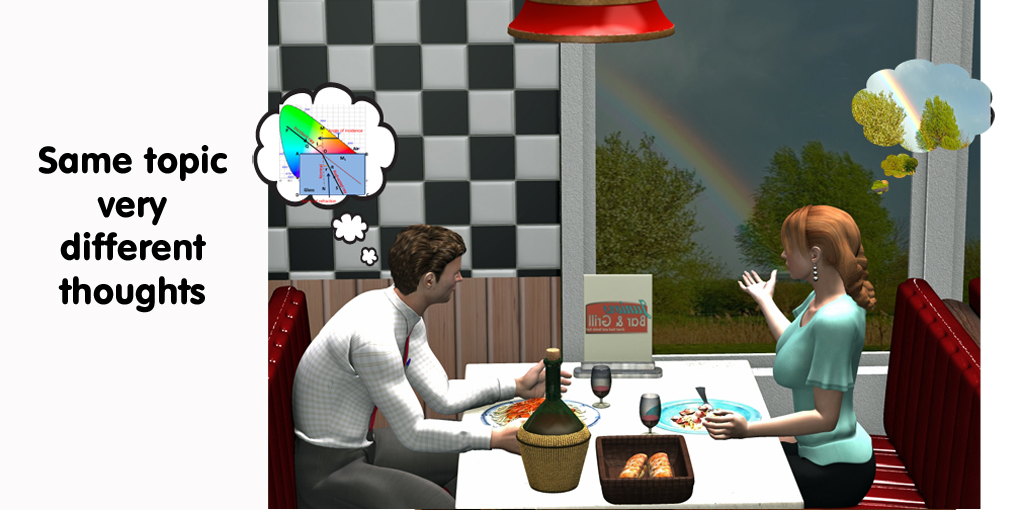 It’s been a beautiful evening. The meal was delicious. The waiter had been right, the dessert was to die for. Noticing the smile on his face, you reach out and gently grasp your beloveds’ hand. In a warm voice, full of love and contentment, you say, “What are you thinking?”

Your companion squeezes your hand slightly and with a tone of excitement in his voice, he says, “Did you notice that if they moved the greeter’s station two feet to the right, they could add another full-sized table?” Too bad, you’ve made a classic mistake, you asked an engineer what they were thinking.

If you spend much time around an engineer, you’ve already seen that far off look that says we’re in a galaxy far far away. Have you ever wondered what deep thought captured our attention?  Are we designing a new type of computer? Coming up with a way to create atmosphere on Mars? If you intend to continue your relationship with the engineer, you need to accept that you are better off not knowing.

I know, you would like to believe that we go around thinking deep thoughts filled with calculus, advanced physics and a desire to improve life for all mankind. And really, that’s almost true. We do think those thoughts, just not nearly as often as you imagine.

This week while my wife and I were going to her mother’s house, I happened to notice the license plate on the truck in front of us, 7532. Yes, there were letters associated with the numbers but they have nothing to do with my story. I found the sequence remarkable enough that I pointed it out to my wife.

Fortunately, she’s been married to me long enough that she didn’t feel the urge to pull over and hit me when I explained that the sequence was self-contained. Each number was two less than the previous number except for the last number, which happened to be the key to the sequence.

I was just starting to explain that this was the way I remember number sequences such as telephone numbers and account numbers, when a suicidal squirrel forced her to hit the brakes. He was very fortunate my wife noticed him, I never saw him.

It’s not that our thought process is so different from yours, we just have a lot more tools to help us interpret our environment. For example, when you see a rainbow, you think how beautiful it is. You might even know that the color bands are caused by refraction of light. A few of you know that refraction is a phenomenon caused by the different wavelengths of light traveling at a slightly different speeds through the water.

I see a rainbow and indeed spend 12.9 milliseconds appreciating the beauty. During that time, I’ve consulted my memories on rainbows and recalled that it’s supposed to indicate the end of a storm and related to a change in the speed of light.

Yes, I know you got to the same thoughts but from here my thoughts turn to the variable nature of light. Why is there an absolute upper limit? How slow can it go? More importantly, what practical use can I put this to? While you’re still appreciating the beauty of the rainbow, I’m thinking about practical applications. Can I use it to decode information encrypted in the color streams? Can I use it to create a 3D image? What’s the minimum amount of time I have pretend interest before I can politely Google some of the answers?

When you ask me, “what are you thinking,” there’s also the difficulty of answering you. I think in terms of electronics, vectors and spreadsheets. You probably don’t. How can I explain a probability distribution without giving you a fifteen minute lecture in probability? How do I explain that a beat frequency isn’t the music produced by a drummer, it’s the frequency caused by the difference in the frequency of two different sources. I’ll leave it to you to discover why it’s important but it’s a safe bet that somewhere along the line, a beat frequency was involved in your ability to read this.

Try it. You’ll be amazed how much this improves conversations between you and your engineer.

If You Want To Become A Better Writer, First Become A Better Listener
Language and Culture
Where I Admit I Made A Mistake About Congress
Wanted, a Women's Magazine for the Rest of Us