All I Want For Christmas is Rural High Speed Internet

All I want for Christmas is rural high speed Internet. Well, at least my area of rural America with unlimited data while I’m wishing. As ridiculous as that sounds, it’s true for me and an ever increasing number of people living in rural America. With all the advances made in technology, rural America has largely been ignored by the Internet. 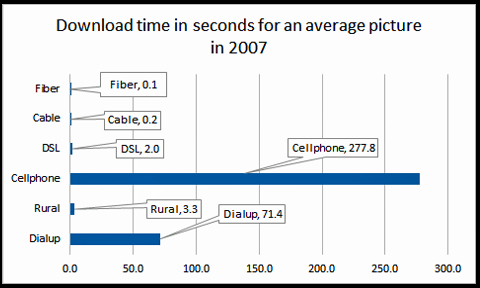 When I moved into the country almost 25 years ago my only choice for internet was 56 kbps dial-up. In 2007, when DSL became available in my area at a blazing fast 1.2 mbps, I jumped on it. Back then the world was still discovering the Internet. YouTube had only been in existence for two years and people were only beginning to think about streaming video.

Almost 10 years later and 1.2 mbps is still the highest speed available to me. It’s not a question of money, this is the only unlimited “high” speed option available to me. As a matter of historic perspective, I signed up for DSL the same year the iPhone was introduced. Consider all the improvements made to the iPhone over the last nine years. 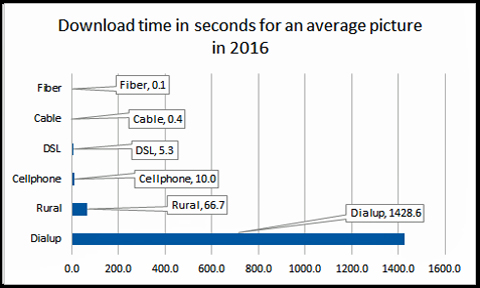 The first iPhone had a display of 320 by 480 pixels with a 2 mb camera. Today the iPhone 7 is 1334 by 750 pixels with a 12 mb camera. That’s impressive but it also shows where my problems start. When everyone was taking pictures with a 2 mb camera, pictures were about 400 kilobytes, around four seconds of download time at my 1.2 mps. With a 12 mb camera, we’re seeing pictures on the order of 8 megabytes or about eighty seconds before I can see that picture of your grandchild.

Streaming?  Don’t make me laugh. As much as Amazon and Netflix beg me to use their streaming service, it’s simply impossible at any resolution better than VHS used to give. Throw in the occasional video dropouts that cheap tapes would give you and you start to see why I don’t even try.

When I was young and innocent, I firmly believed that technology would improve my speed. When nothing changed and my relative speed became slower and slower I took a closer look at my situation and realized that there was no incentive for my provider to improve my service.

Things have changed over the years; my service has gotten worse. When I started with Earthlink I had a fairly solid 1.2 mbps. When they subleased my service to Roadrunner, I didn’t even notice a change. Two years ago, Earthlink shifted my service to AT&T and my DSL line will reset If I have too many simultaneous connections. You’re right, this could be my modem or my line but since I have a second DSL line coming to the house for my wife and her line acts the same way, I suspect AT&T.

AT&T has no incentive to improve my DSL service. They would rather sell me cellular data in small expensive blocks rather than high speed unlimited DSL. Not surprisingly, my Verizon cellphone has no problem giving me 4G downloads at five times the speed of my DSL. I already have high speed Internet as long as I’m moderate about my usage.

It’s unfortunate this is exactly what the phone companies are telling Congress, the rural areas don’t need high speed internet because wireless technology is available. It’s a lie, but maintaining all that old infrastructure and copper wire is expensive. Unless you live in the country, you probably don’t have a landline. In the city you usually have cable for your Internet and phone service. Many of you have already ditched the phone service in favor of your cellphones.

Let’s take a look at some of the numbers. Using the Amazon series Bosch as my benchmark, 45 minutes of video is approximately 700 mb. Call it one gigabyte for one hour of video and that’s at medium resolution.  I would burn through the 16 gigs of my data plan in 16 hours. If I share it with my wife, each of us would get 8 hours per month. Remember this is only at medium resolution, suitable for my tablet but on my TV, it reminds me of the old VHS days.

Given moderate usage, availability and Microsoft’s tendencies to push out updates on a weekly basis, the average family will consume approximately 200 gig a month.

What about those unlimited cellular plans? Take a close look at the fine print and you’ll see that you get throttled back to dial up speeds after you exceed your monthly allotment, usually 20 gig or less. Once you’re at dial up speed, it hardly matters.

In a world where your internet connection is your pipeline to information, rural America is rapidly becoming isolated, nor is this trend likely to change if the phone companies have their way. They’re very aware of the situation and realize just how much power this lifeline represents.

Think about this. Suppose Verizon and Amazon were to make a deal and Verizon announced that as long as you were accessing Amazon servers, it didn’t count against your plan. This would certainly encourage us to shop at Amazon and join Amazon Prime for the videos. Netflix would have to find their own partner just to survive.

Ever wonder why net neutrality is so important? This is the answer. By capping our bandwidth and providing specific free zones, the Internet providers have the power to direct our shopping and viewing habits. This is power and AT&T is already doing it with DirecTV.

I think there’s still hope for rural America but unlike my naïve wishful thinking of yore, it’s not technology that will save us, it’s a desire by Google to keep the playing field level. With Verizon buying Yahoo, assuming Yahoo still has any value left, it won’t be long before Verizon is offering plan free data searches for all searches using Yahoo. Google recognizes this threat to their power and is already working to roll out their own high speed network. I only hope I see it before the average family is using one terabyte of data a month while I’m still chugging along at 1.2 mbps.

Using 1040 Advertising As A Revenue Stream, Why Not?
Communication, Google and a Nexus 7
Failure To Communicate, The Evolution of A Bad Design
The Committee on Science, Space, and Technology?