In a world where we have to struggle just to keep up with the latest in technology, it’s all too easy to take things for granted. For example, we’ve all seen Einstein’s equation, E=mc2. Most of us know the equation has something to do with mass, energy and the speed of light but it has no real meaning for us. Its use falls in the domain of the egghead physicists.

Admittedly, I’m in the same camp you are. I’ve never had occasion to use this equation at work and certainly not on the ranch. So why am I wasting your time with this equation? Because something so pervasive in our society should be understood and it’s actually useful.

A simple paperclip equals about one gram of mass

The equation defines a relationship between mass and energy. If you convert mass to energy, you get lots of energy, an unbelievable amount of energy, gigawatts. If you convert pure energy to mass, you need lots of energy for very small amounts of mass. One gram of mass produces energy equivalent to the explosive force of 21 kilotons of TNT.

Okay, you have the concept. I’m going to assume you’re the responsible type and not going to rush out and try this on your own but consider the disintegrator weapons so popular in science fiction. Armed with this equation, I realize aliens can’t destroy matter without releasing an amount of energy equivalent to a large nuclear bomb. The alien weapons might be shifting the matter to a parallel universe, forcing it forward or backward in time or causing it to collapse into very dense debris but they don’t have a disintegrator ray.

For that matter, consider Star Trek’s teleporter technology. E=mc2 makes it clear that the transporter is not ripping people into pure energy and reassembling them at a remote location. The amount of energy released by one poor redshirted ensign being transported would totally destroy the Enterprise. Personally I think they’re using an N-space tunneling technique and the producers have been lying to us all this time. 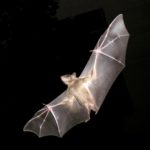 Given today’s science fiction preferences, I feel obligated to discuss werewolves and vampires. I know that Einstein never meant his equations to cover supernatural but really, we take a 180 pound human and turn him into a 2 pound bat? Where did all that mass go? That much energy would reduce an entire state to ash. How about when he returns to human?

The werewolf has a similar problem as he goes from 180 pounds of ordinary human to 300 pounds of snarling wolf. When did he get all that mass? Certainly not magical energy, the energy required for one conversion would bring about the next ice age. Maybe he pulls it out of the air but that would cause a major windstorm as 120 pounds of air rushed to become our werewolf.

Oh, almost forgot, you learned one more thing today. Now you know what engineers are thinking about while you’re talking to them and that blank look comes over their face.

The Pleasure of Finding Things Out by Richard Feynman, Too Enjoyable?
Time Travel, We All Do It
An Engineer's Perspective
WW2 and Hacked Email Accounts