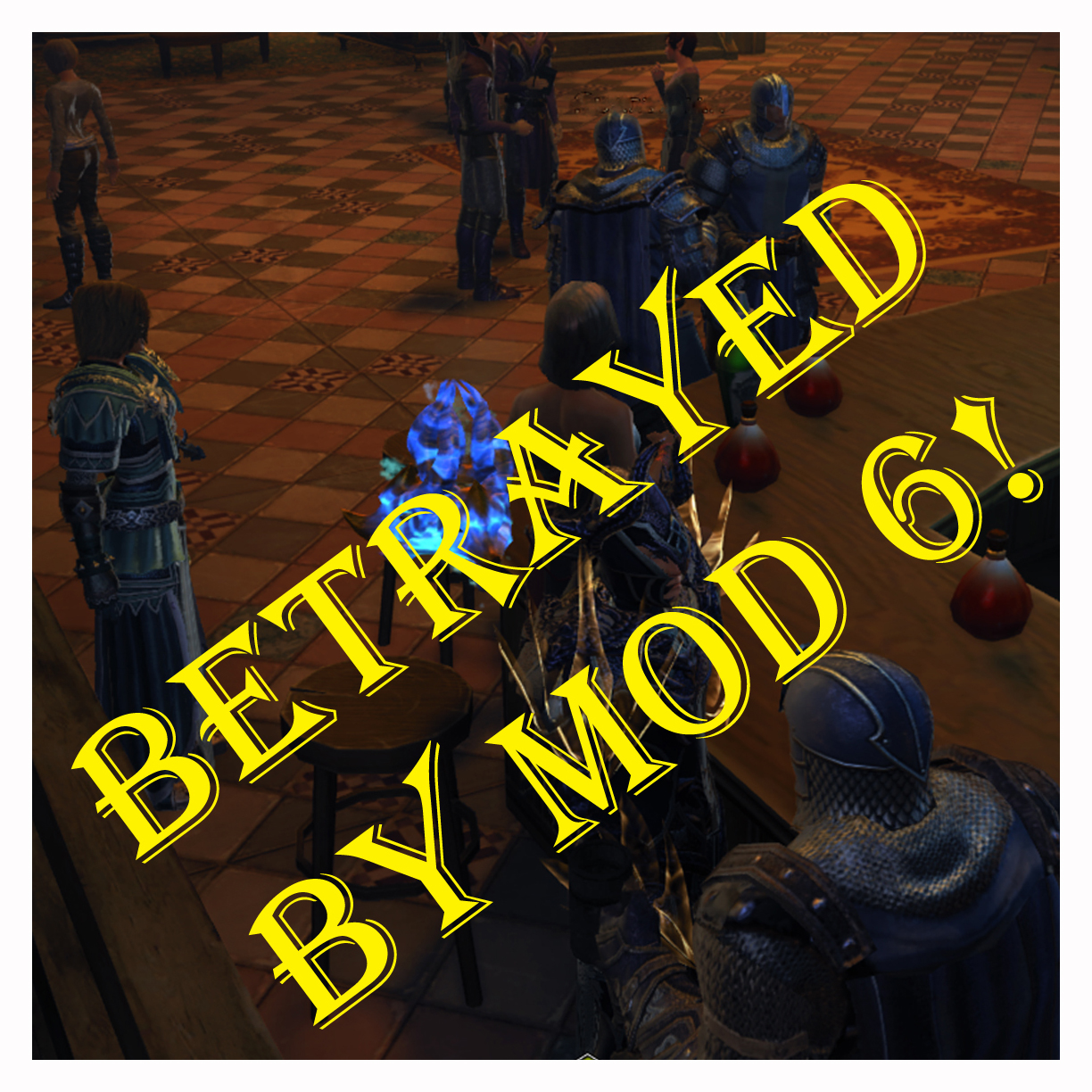 (If you’re not into MMORPGs, Neverwinter mod 6 in particular, do yourself a favor and skip this.)

You say you want me to help you kill a dragon? Times must be worse than I thought when you have to scour taverns to get a group together. Still, like myself, I know that lots of the seasoned adventures retired after the great betrayal. I can make you a nice looking set of rings. As magic rings go, they never were exceptional but after the betrayal, well, your corpse will look really nice when he or she one-shots you. I never was real clear on the sex of that dragon anyway. Oh yes, I’ve defeated that dragon a number of times and lost to it even more times but the betrayal changed all that. What changed? Why’d I retire? That’s a long story young paladin, with all the loot becoming junk and the skyrocketing cost of health potions and repairs, I can’t even afford another ale to see me through the story.

You’ll buy me one. Why thank you, you’re a real life saver young knight. Oops sorry, as a paladin you must hear that a lot. Let’s ignore that and I’ll tell you my story. It started only a few months ago, I was sitting in this very tavern, fresh off my last dragon kill and examining some enchanted gloves I found in the dragon’s treasure chest. I don’t know what it was with gloves and that dragon but this was the fifth pair I had gotten while trying for the enchanted hat I needed to complete my outfit.

Ever since I got to level 60, I’d worked really hard to make sure I had nothing but the very best in wizard’s equipment. I’m not proud of it but I even spent some coin to buy some special gear at the temple. All that great equipment did make combat easier. Okay, it was becoming easy enough that I had put on a few extra pounds but killing that dragon was still a challenge.

Anyway, I was sitting at this table, examining my gloves, when my crystal ball buzzed. “We’ve got good news for you, Dugwath. We’ve been listening to everybody and we think you’ve earned an expansion. We’re going to open up some new lands, give you more challenges and raise the level cap to 70.”

Let me tell you, that was a night of celebration.  I bought several rounds that night. Of course that was when I still could afford to buy a round.

Two weeks later I got another call, “Duggy, we’ve been receiving complaints on you adventurers. It seems all that equipment we sold you was too good, so when we raise the level cap, we’re going to make a few minor changes. You’ll barely notice them.”

Ice cold shivers went up my back immediately, I’ve been around since Everquest and I knew what that meant.

The voice never even paused, “We’re going to take away your ability to heal while fighting. It’s not a big thing, you’ll still have clerics. By the time you get to 70 you’ll have a lot more hit points anyway. Just to make sure you don’t abuse your healing potions so we’re going to increase the timer on those. Not a big deal, just a little balancing. I know the healing potions will seem weak but you can buy healing potions out of our store that will give you 100% instead of the 20% you’ll get with the regular potions. By the time you get to 70 and get back to the dragon lands, you’ll barely notice.

“Oh by the way, some of you were abusing the potions. The mobs complained and now you can only have one active potion at a time. I know it seems like we’re punishing you and well, we are. Think of it as tough love.”

“Get back to the dragon lands? I thought we were going to have new lands,” I said.

“Budgets are tight and we’re really proud of the dragon lands besides, once you’ve seen one forest you’ve seen them all. Rather than give you new lands, we’re just going to increase the levels of all the mobs there. We’ll still give you a little new content but by increasing the levels of all the mobs, improving their damage mitigation and giving them a butt load of hit points, you’ll feel like it’s a whole new land. Don’t worry though, we’ve figured out a way for you to do the same quests over and over so you won’t run out of quests. We want you to enjoy doing the same quests over and over so we’ll also cut the experience from your quests in half.  But hey, it’s too bad you finished out all the quests in the old lands. You’d level a lot faster if you went back to do those.

“I may as well break it to you now, the mob union is a lot better than yours. The regular mobs are going to be a lot tougher than you remember. Think lizards on super steroids. In fact I’d recommend you start running around in packs, a solo adventurer is going to be dead meat after the expansion. Oh, as you work your way to 70, forget getting any good equipment. This depression has hit the mobs too. Count yourself lucky if you manage to loot a scroll of identification after the expansion. Finding armor you can use, well don’t get your hopes up.”

Needless to say, I didn’t want to believe things would go that bad. It sounded like they were trying to chase all of us off. When the expansion arrived, I realized it was worse than I ever expected. I must have spent nearly 200 gold on repair kits while the mobs barely broke a sweat defeating me. I think they were getting bonus points to one shot me. Even the local vendors recognized that I was looting junk off the few mobs I did defeat and gave me only a few coppers.

Still, I persevered. I worked my way up those ten levels. Boring quest after boring quest, useless potion after useless potion, repair after repair. Then one fine day, I did it, I finally hit 70. I could go back to my beloved dragon lands.

20 minutes and twenty repair kits later, I knew my beloved dragon lands had changed forever. Despite what management was trying to tell me, I was no longer having fun.  This was no longer the adventure I had signed up for. After spending half my fortune in repair kits and getting nothing for it, I realized it was time to retire.

It’s unfortunate but after the expansion, I have more fun sitting in this tavern watching other adventurers drag themselves in and come to the same realization. It’s really too bad, with all the people quitting, this tavern is probably going to go out of business. Evil has truly overcome these lands.

What? Please don’t say something that hilarious when I have a cup to my lips. I’m sure you see how funny that was. I know management says that a few mistakes were made and they’re working on it but after a month do you really believe that? Their solution was a temporary sale on the 100% health potions.  Sure you don’t want a nice set of rings? Better get them now, management has already announced another expansion, probably to fix all the problems of the current expansion but at this rate, all the new gear will probably have negative stats.

I wish you good luck on finding your group but as soon as I finish this drink, I’m off in search of new adventures. I hear Witcher 3 is about to come out.

The Loss of A Subscriber; You're More Important Than You Realize.
Communication As Seen By An Engineer
I'm Sick And Tired Of Hearing Politicians Say Follow The Data
Change, The Impact of iPad On Our Lives