When I got married, I knew my wife did not share my fascination with technology. She wouldn’t understand what I do on a daily basis and there would be communication problems. The trade-off was her love of history and her knowledge of animals. These were skills I lacked. To say I did not fully comprehend the situation would be an understatement. I knew I could change her mind on technology. What I did not expect was to find myself infected with an interest in history. I blame it on Time Team.

In describing me, people might use words like ego, opinionated, focused, stubborn and maybe a few others not suitable for this post. Thanks to twenty years of marriage to me, my wife is now able to hold her own with technology. If I needed to know something about history or the various animals on the farm I could ask her. No need to contaminate my mind with useless knowledge. That was the theory at least.

Any good engineer will tell you there’s often major differences between theory and practice. One day I found myself looking for a background show, something to provide noise while I was working on Poser. With a limited selection of material I hadn’t watched, I decided to watch my wife’s Time Team DVDs. I was hooked. Three Time Team episodes later, I put Poser up and settled down to watch the remaining DVDs. 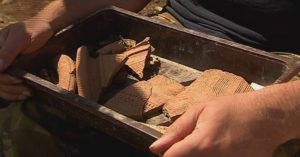 Everything goes into collection trays

Imagine a reality show where archaeologists are put on a historical site and try delve into the details of that site. How? By digging trenches, lots of trenches, looking for clues into the history of that site. The clues might be as slight as minor changes in the color of the excavation, to as dramatic as a gold Roman coin. Usually though it’s just pieces of broken pottery or building stones.

Why would I find that fascinating? For twenty years, Time Team used many of the same people and the same formula. I was able to see their technology evolve and mature as they went from very sensitive magnetometers and resistivity measurements to subsurface radar. I was able to see people mature into experts in their field as they considered theories and tried to maximize their chances of unraveling the mystery of the site. For an engineer, this is pure gold. 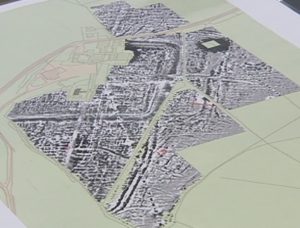 Each show starts with a theory and a site. As if that’s not enough, they’re only given three days on a site, no more but frequently slightly less as they battled bad weather.  They might have a stunning success and they may end up as empty handed as Al Capone’s vault turned out to be. As an engineer, I find their failures as fascinating as their successes. That’s one of the ways we learn.

In the early days of the show, they almost had to beg people to let them dig on their lands and couldn’t even think of going to someplace with significant historical value.  Sometime around season five, people started realizing Time Team could produce results. That’s when they started being invited to sites with true historical value.

Without a doubt, much of Time Team’s allure can be credited to the cast. 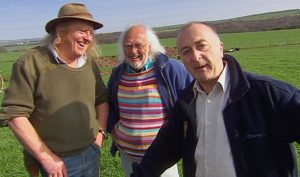 Tony Robinson provides narration for the show with an infectious high energy level. He’s not afraid to be the one asking the stupid questions that you’re already thinking. He also does a great job of not letting the show take itself too seriously.

Mick Aston reminds you of Christopher Lloyd in Back to the Future. He obviously knows what he’s talking about but you get the impression he’s seeing a totally different world than the one you’re seeing.

Phil Harding is credited as the field archeologist. In other words he does a lot of digging. That digging has given him a lot of knowledge and practical experience. You almost never see Phil without his hat. It’s proven so popular, his hat has its own Twitter account, @TheHardingHat. 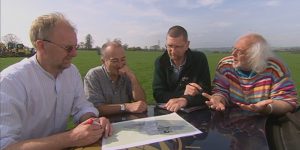 John Gater is the Geophysicist on the show. He’s the one organizing the equipment that gives them insight on where to dig. Maybe it’s the technology he plays with or simply his personality but I can identify with the problems John has to face.  He thinks like an engineer.

Stewart Ainsworth is their Landscape Archaeologist. Honestly I didn’t care for Stewart when he joined the show. He was usually traipsing off the site looking at the countryside. It seemed like he was simply avoiding the work. After a few shows, I came to realize that he could look at the land and come up with many of the missing pieces because he could see the way the land forced people to build. Stewart gave me a new respect for his field.

There were a number of other very memorable people joining the Time Team in the twenty years the show lasted but these people were the core.

Alas, as is often the case with long running shows, the Time Team producers felt they needed to improve the formula. Make it more hip and exciting. Dumb it down to widen its appeal. Sounds a lot like our current approach to politics. In Time Team’s eighteenth year, these changes were introduced. In their twentieth year, they produced their last regular show. The new changes drove away much of their regular viewers and failed to attract a significant number of new viewers.

You can’t get all of Time Team in DVDs. I don’t know why but I suspect the producers didn’t understand the value of the shows failures. Highly motivated people can and do fail, frequently. It’s all part of reality. Fortunately you can find most of the episodes on YouTube.

I still don’t care how many wives Henry VIII had but now I understand the impact he had on the country side. I know how to tell iron age pottery from Roman pottery and why that matters when you’re digging. I know that the Vikings carved their pottery and why. I’m considering mounting a magnetometer on my quadcopter and surveying my property. I’m fairly sure the Vikings never made it to Texas but who knows what else I might find.

As if I needed more projects. Heed my warning, beware the Time Team. 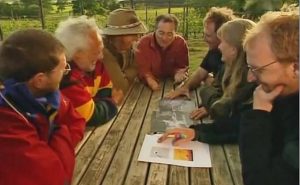 Duolingo, How To Enjoy Learning A Language
A Mother's Day Post On Political Change
If You Want To Become A Better Writer, First Become A Better Listener
Poser Debut, an Engineer's Review