Grammar and Rhetoric, the Drout Way 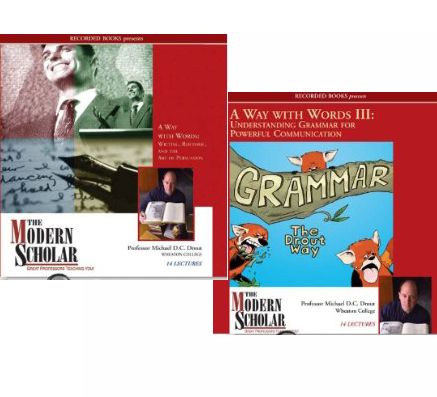 When I wrote my post on the confusing rules of writing, the last thing I expected to find was an answer. Two months later not only have I found several answers but I have a better insight into the way I learn. All thanks to two books on rhetoric and grammar.

Living in rural Texas, it’s almost a given that I have a long commute. I often use that time to listen to my Audible books. I’ve listened to a number of books in my attempt to improve my writing and to gain a better understanding of communication. Most of them were very good, a few were informative although dry and one was a waste of two hours. Yes, there were also a few weeks I spent listening to fantasy novels. You can’t study all the time. 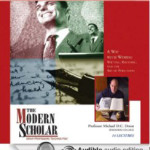 When I finished my last Larry Correia novel, I was ready to return to improving my writing and I started listening to “The Modern Scholar: Way with Words: Writing Rhetoric and the Art of Persuasion” by Professor Michael D.C. Drout. This is a series of lectures on using and understanding rhetoric. Rhetoric, as Professor Drout explains it, is the basis for communication and getting people to act on that communication. I was apprehensive about getting the audio book because it was a series of lectures, by a professor, of English. Even today all I have to do is think about my English Professors in college and my eyelids start drooping.

You already know my fears were unfounded, otherwise this would be a very short post. Five minutes into the book, I know that I’m going to enjoy these lectures. Professor Drout loves his topic and knows how to keep you interested. Better yet, as he is teaching you the terms and rules of rhetoric, he’s able to explain why the rules exist.

Learning about the various forms and usages of rhetoric was fun. Professor Drout would explain a concept and then discuss an example from a number of well-known speeches. As he did this, you started to understand what made the speeches great.  His great love of this topic comes across clearly as he dissects each speech into the various rhetoric techniques.

Of the fourteen lectures in this audio book, three of them are on grammar. Grammar, really? I was ready to fast forward through those lectures but by the time I reached them I realized I was enjoying the lectures and decided not to skip them. This is where I started understanding a key element to my learning.

I can listen to a number of rules and file them away as miscellaneous. Too many rules that don’t make sense and I do well to remember 10% of them. Give me background so I can anchor that rule and it will stay with me. For example, Ohm’s law is a fundamental law of electronics. If I put 120 volts across a 2 ohm load, I’ll have 60 amps, at least until the circuit breaker trips. Having observed that rule several times in my early life and facing the wrath of my parents as I reset the breaker, I won’t forget Ohm’s law.

If someone tells me not to end a sentence with a preposition, what are the consequences? How was this rule derived? Professor Drout compares poor grammar to eating with the wrong utensils. Usually not fatal, but it communicates a lot about the person eating his peas with a knife. Then he goes on to explain that the preposition rule is derived from Latin grammar. The rule still doesn’t make sense but I can anchor it in my memory, not as a arbitrary rule but one that actually has historical derivatives.

I also found out that using passive tense isn’t illegal, it leaves information out of the sentence, possibly resulting in misinterpretation. We’re encouraged to use active tense to improve our readability.

He explains the use of commas, periods and semicolons as spaces in time. A comma is one beat, a period as two beats and a semicolon as a beat and a half. No rules, just a description that helps me understand when I need a comma, period or a semicolon. The grammar police will still deplore my usage of commas but I have a better understanding of when I use them. 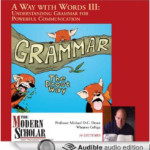 I enjoyed his Rhetoric lectures so much that I bought his “The Modern Scholar: A Way With Words Part III: Grammar for Adults“. I’m about half way through it now and the subject of sentences ending in prepositions has come up. How can you fault a lecture when the English professor suggests saying “Keep your stinking Latin grammar rules in your own language” when responding to the language police over ending a sentence with a preposition? It was tongue in cheek I’m sure but it certainly grabbed my attention.

It’s obvious that I’ll have to listen to both lecture series a few times before you see any significant improvements in my writing but Professor Drout has created a dilemma for me. All my life, my teachers have done their absolute best to make me hate poetry and they were very, very, successful. Show me three lines of poetry in a book and that’s three lines I won’t be reading. Professor Drout has another book in this series, “A Way with Words IV: Understanding Poetry”. As I get closer to the end of “Grammar for Adults”, I find myself asking, just how bad can that go?

Married to an Engineer - Part 3, Brussel Sprouts
Sundae
Trust In The Digital Age, Has The Definition Changed?
The Challenge of Blogging and an Offer