Married To An Engineer, Sometimes You Have To Call The Professionals

Sometimes you have to call the professionals. In a story, you have time to develop all your characters. You let the reader discover how they look, how they react and their motivations. Good writers do it seamlessly. Too bad I’m not that good (yet), so, I’m taking the easy route. This story has three characters and it’s the confluence of these characters that shows you what my wife has to put up with.

Character #1, an Australian Shepherd – Ronin is our male Australian Shepherd. At three years old, he’s doing great in Agility and Confirmation. In my wife’s eyes, he has only one fault, he feels it necessary to mark his territory. He takes this duty seriously and ensures that no bush in his domain goes unmarked. My wife doesn’t understand this behavior. As a male, I understand his motivation all too well but since society strongly frowns on my using his methods, I’m forced to use other methods.

Character #2, a John Deere tractor – When it comes to maintaining a pasture for horses in rural Texas, owning a small tractor is almost a necessity. Mine is a small John Deere, one size up from the garden tractor. It’s served me well over the years but after an encounter with some mesquite trees, the right front tire had a number of punctures (we grow tough mesquite trees in Texas). I patched the four I could find and used Slime (a liquid tire patch) for the rest. This allowed me to drive it as long as I aired it up weekly. Use the tractor without airing it up and the tire would come off the rim. This happened at least twice, once to me and once to my wife. Putting the tire back on the rim and getting it aired up was difficult but possible.

Character #3, a male engineer – Here’s where I come into the picture. I have all the same male urges to mark my territory as Ronin and an Engineering drive to maintain my own equipment. I see fixing things as a challenge and as a method of marking my territory that’s fully approved by society. Yes, I do smile but the sun was very bright when this picture was taken.

There’s the cast of characters. They all came together during the Christmas holiday while I was once again airing up the tire in preparation to moving hay out to the horses.

During the last pasture mowing my tire had developed several more holes that also needed patching. Despite more patches, almost a gallon of Slime and at least two cans of SealIt!, my tractor tire was still leaking air. Like a bad habit, it was rapidly getting worse. Now I only had three days before I had to refill the tire.

Enough was enough and I decided the Christmas break was the perfect time to replace the tire. Amazingly, Amazon sold the size I needed. Three days later it was delivered and, bonus points, my wife thought it was a Christmas gift to her.

When I started working on the tire my wife was surprised that I intended to replace it myself. Just like her inability to understand Ronin’s need to mark all the bushes in his territory, she did not understand why I would try to do it myself rather than have a tire store mount it for me. I explained that it’s simple, this was my opportunity to mark the tractor. It would be easy. After all I’d already had to remount the tire twice when I’d forgotten to air it up.

The tire acted like it was glued to the rim. Apparently when they say SealIt!, they mean seal it forever. I let all the air out of the tire but unlike previous times, the tire refused to budge. I even drove the tractor around on a very flat tire but that tire was not going to come loose. As I’ve cautioned before, engineers tend to become very focused on problem solving. After two hours of prying, prodding and hammering, I made a Gordian knot decision. I decided to cut the tire off.

This turned out to be relatively easy but the tire still refused to budge off the rim. That’s when I found out my tractor tire also had a steel cable embedded in it to hold it tight against the rim. I couldn’t use my saw because I would risk cutting the rim too. An hour with my Dremel and a very fine cutting tool (to avoid cutting the rim) did the trick. The tire was finally off and I was halfway there.

I’ll spare you the details, four hours into the remount attempt I admitted defeat. I never got more than halfway. I boxed everything up and took it down to the tire store. Fifteen minutes and five dollars later (Well, actually $20, I was so grateful I tipped him $15). Sometimes you have to call in the professionals.

Here’s today’s lesson. Males need to mark their territory. Ronin is merely following his instinct. Society doesn’t allow us to follow his example so we look for other ways. The next time you don’t understand why your male is acting up, he’s probably just marking territory.

Engineers are worse. We have to test our limits on a regular basis but we’re never ready to admit we’re beat. I spent almost ten hours trying to replace the tire before I reluctantly admitted I was better off having professionals do it and then it was only because we needed the tractor. Even now my mind is full of schemes that might have succeeded.

As a male, I’m driven by instinct to mark my territory. As an engineer, my instinct is to solve problems. Pity my poor wife. She has to deal with both, fortunately she knows that sometimes you have to call the professionals. 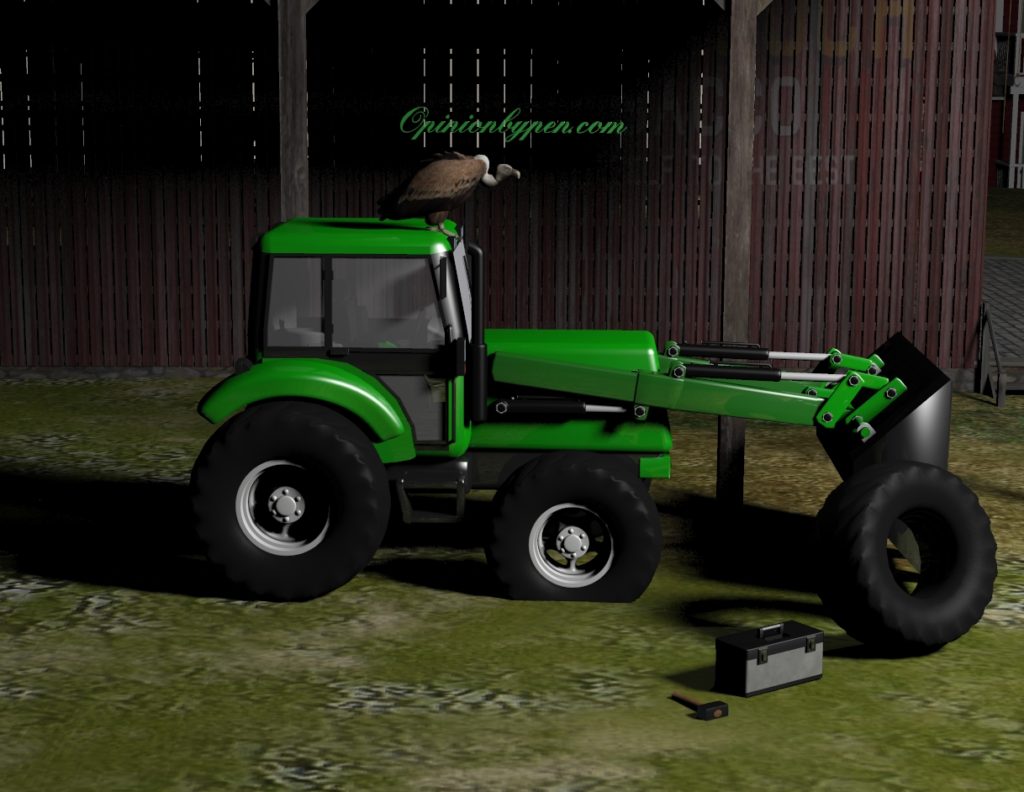 What To Buy for the Engineer in Your Life?
How To Drive Customers Away, Why I'm Done With Netgear
Happy Mother's Day
Congress, Can We Force Politicians To Show Capability?