The Sundae Style of Management, Please Don’t Try This At Work

It’s been fairly busy at work this month and nobody wanted to help me out by writing a guest blog. In a moment of desperation, I agreed to let Sundae share her views on management. To be fair, I have worked for managers who seemed to share many of her theories. Fortunately, my current manager isn’t one of them.  It’s only in the evening that I have to endure the Sundae style of management. 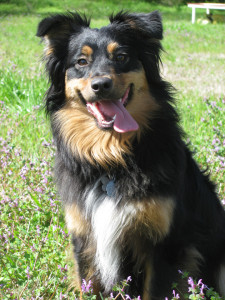 Sundae having a good day

Hi, I’m Sundae, a female Australian Shepherd responsible for leading my pack. I’ve been featured in my own post and two years ago I was called upon to explain why fashion changes. Today, I want to talk about leadership.

It’s true that leadership is hard but I’ve never understood why humans seem so preoccupied with different management styles. I’ve sampled many books on management and found them to be utterly lacking in substance and taste. At best she only looks at the cover and might read the first page. While I’m only responsible for one human, I’m sure you will be able to apply these techniques to your own subordinates. I like to call these techniques the Sundae style of management.

Rule 1: If your employee knows you disapprove of their actions and they continue to repeat these actions, shun them. Ignore them completely until they relent. My charge will frequently get up early, get dressed and leave the house. Once it becomes obvious that he intends to repeat this behavior, I refuse to acknowledge his existence. I completely ignore his attempts to beg for forgiveness by scratching my stomach. When he finally realizes how much I disapprove, he always returns home. This is usually when my workday ends.

Rule 2: Don’t hold grudges. When he returns home, I reward him handsomely by allowing him to scratch my stomach. On the few days he realizes he should stay home, I reward him by jumping in his lap and snuggling up to him. For some reason, he enjoys it when I put my head under his chin. Note, based on most HR manuals I’ve read, this is considered unacceptable for human to human contact.

Rule 3: Ensure they adhere to a schedule. My charge simply does not understand how important a schedule is. At night, I frequently have to tell him he’s staying up too late. I don’t want him to feel I’m nagging, so I simply rest my chin on his knee and increase downward force until he relents by going to bed. Likewise, I make sure he gets up at the correct time. If he continued to ignore me and stayed up too late, licking him in the face always works. Schedule is important. I hate to admit it but her technique does work here.

Rule 4: Don’t let them get lazy. When he gets home, I give him time to eat. At least ten minutes. Once he’s finished his meal, he’s expected to join the rest of us outside. If he shows signs of hesitation, I bark at him. Ronin has picked up on this and will also bark at him until the entire family is outside exercising.

Rule 5: If you’re not comfortable with his ability to accomplish a task, micromanagement is best. When it comes time for my food, I don’t trust him to simply get it right. This is a task that’s too important to leave to chance. While he prepares my food, I’m barking clear precise directions at him. This method has not failed yet. Clear and precise directions are hardly what she’s barking me. It’s more like hurry up and stop skimping on portions.

Rule 6: Be prepared to help. On those days when he doesn’t run off early, he takes his shower after he has breakfast. After showering, he knows he’s supposed to play ball with me. As he dresses I continue barking to encourage him to dress faster. If another dog comes by while he’s dressing, I will drive them off so he doesn’t become confused and forget the task at hand. It’s been close a few times but he’s always managed to dress completely before going outside with me. Sometimes I get the impression he’s going slower just to show his independence but I simply bark faster at those times to show the proper urgency.  She’s right, I’m deliberately going slower. I’ve always resented this type of management.

Adhering to the Sundae style of management will help you turn unruly employees into truly productive members of your pack.

While I have had managers that seem to follow Sundae’s guidelines, I’ll point out that most HR departments would frown greatly on some of her views. If you read closely you’ll also notice most of her methods are very self-centered. Not that that would exclude some of my former managers. Please, take it from me, don’t try the Sundae style of management at work.

Ego, It Doesn't Improve Your Homelife Either
Great Appearance, Good To Have, Bad To Vote For
I'm Male But I'm Not That Stubborn, Really
Credibility, Amazon Lost It, Goodreads Failed. How Do I Choose My Next Book?