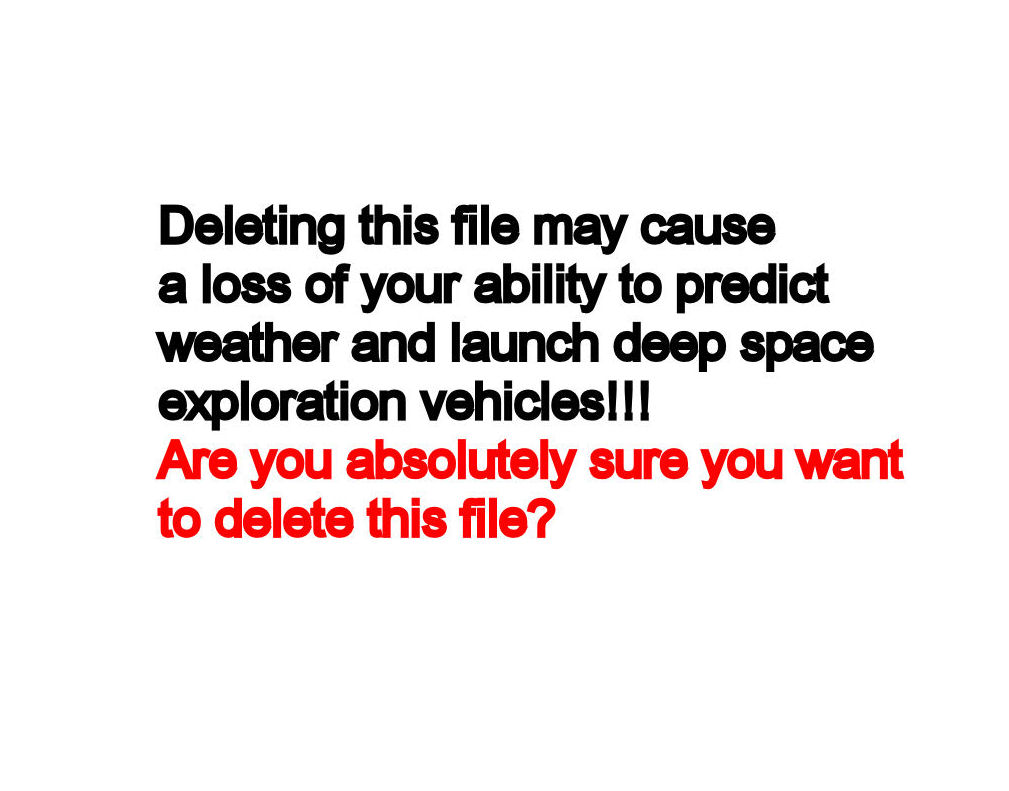 I own an old DVD VCR. It’s a good VCR but it has one issue that really irritates me. In order to record on a DVD I have to initialize the DVD. What I don’t like is that is asks me four times if I’m sure that I want to initialize the disk. I could see asking me once, maybe twice but four times seems just  a bit much.

Almost every program I know seems to go to great lengths to protect me from myself. By the time I get to that final “By deleting this file the world may come to an end”, I’ve totally forgotten what the file was. I’m now on a quest to get this machine to do what I told it to and I’m blindly hitting “Y” to get to the end of this quest. At this point, I’m not even reading the text.

I understand protecting me from myself, Microsoft does it really well with their Trash folder. I believe Mac has something similar. So why all the effort to protect me? It makes no sense. The strange thing is that if I were to create a list of pet peeves and do a poll, this would come up high on the list. So why does this issue come up so often?

I’ve known a lot of programmers, some good, some bad and some absolutely brilliant. None of them struck me as somebody that would write code just to annoy the user. In fact, if they wanted to annoy me there are a lot of better ways to do it. Maybe they really believe I need that amount of protection from myself.

Suppose, just suppose, that after a long day of coding programmers start to feel a wee bit lonely and they’re looking for a response from their machine. They really can’t have the program respond with “GOOD JOB!!!” every time someone enters data. It’s very acceptable to program the machine to ask “Are You Sure”. They already know every programmer does that. By doing this, any time the programmer gets lonely, he just tries to delete a file and gets a nice warm glow with the feeling that his computer is looking out for him. The more confirmations he puts in his code, the lonelier the programmer must have felt at the time.

In case you’re wondering, I really don’t believe any of this but the next time you see the message “Are You Sure?”, maybe you’ll remember this, smile, and not be quite as irritated.  That’s all I can ask unless I’ve embarrassed some programmer enough to respond with his explanation.

Are You Blocking Me Again Or Is It My ISP Cache?
Bryce 7, A Virtual World Builder
Why All the Hate For PO Boxes?
Can A Love Of Reading Be Considered A Secret Advantage?