Given the number of posts I’ve made on 3D printers, it’s safe to assume that I feel I’ve mastered the basic techniques. Still you always wonder if the grass is greener on the other side. In my case, thanks in part to the Covid blues and Amazon’s Prime day I ended up with a SainSmart Genmitsu 3018 PROVer CNC Router. This gave me a working area of about 10″ x 6″ for wood, plastic and engraving of soft metals. 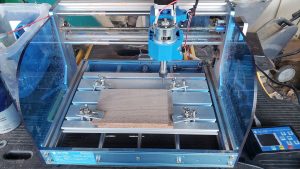 3018-PROVer CNC after a hard day of cutting

It’s not like this was a spur of the moment purchase. I had been looking for almost a year and had decided on the SainSmart 3018 PROVer. Based on my experience with 3D printers, I wanted the limit switches and the automated height setting. I also wanted the offline controller because I did not want to tie up a computer while carving. When Amazon dropped the price below $300, I decided my wait was over.

This was going to be great. I honestly thought that with my strong understanding of 3D printer techniques, I would be cutting wood in no time. Certainly wasn’t the first time I’ve been wrong.

The 3018 is advertised as a 30 minute kit. Much like my greenhouse experience, it took me far longer than advertised, two hours to be exact. In all fairness, none of the assembly was difficult, I spent most of the time making sure I got it right. If I had to do it again, I would probably get it down to 45 minutes.

Once I had it together, I realized I had no idea what I was doing. With a 3D printer, you start with a 3D model called an STL file and then use a program called a slicer to convert it to a gcode file the printer can interpret. CNC is a similar process but it took me a while to understand the process. SainSmart introduced me to GRBL, Candle and Fusion 360.

Saving you from all my confusion, GRBL is the software on the CNC controller, Candle takes a gcode file, designated with an .nc extension, and sends it to your controller. If you use the offline controller, you may never need Candle. Fusion 360 is a CAD (Computer Aided Design) program that allows you to create your design and convert it to an nc file.

For a number of reasons (slow internet) Fusion 360 was out as were several of the other cloud based programs. I’ll discuss software later but I’ve come to appreciate DeskProto. For now, we’ll stick with the SainSmart 3018 PROVer.

Once I managed to sort all the software out, I needed a home for my CNC. I had intended to operate the SainSmart 3018 PROVer next to my printer above my desk. 3D printers don’t create a lot of dust. CNC machines are removing material from your stock and that means lots of dust and debris. SainSmart sells an enclosure to contain the dust and reduce the noise. It probably does a fantastic job but not nearly good enough to convince my wife this was an indoor machine. 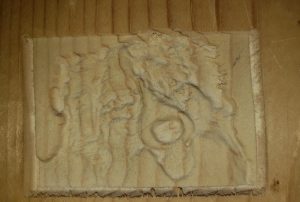 If the clamps aren’t tight, the wood shifts

My first attempt used a piece of scrap wood and a 3D stl file of one of my dogs. I learned several things from this attempt.

My second attempt was almost as educational. This time I used a model from Thingiverse. Because of my limited cutting area, I had to shrink the model.

I wasn’t displeased with the result but felt I was missing a lot of detail. As a check, I printed a version of the model in wood embedded PLA filament. I was pleasantly surprised to see the level of detail was almost the same between the two models.

By now I understood the issue with the engraving bit and had acquired some ball nose end mill bits. These removed the wood perfectly without regard for grain direction. The router bit determines fine you can get the features. Too large and you can’t get small details, too small and it takes forever to make your cut not to mention that the wood probably can’t support the detail. 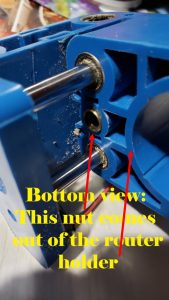 Picture I sent to SainSmart

Attempt six was for all the marbles and I was using a carefully selected piece of cedar. Half an inch into the first cut, the bit plunged all the way down to the limit switch. Wondering what went wrong with my .nc file, I reset the motor and tried a different file, with exactly the same result.

The problem became obvious when I tore the machine down. The nut used to move the motor holder had come loose from the holder. When the router bit engaged with the wood, it would act as a drill and pull the motor down. Not seeing any attachment method, I had to conclude the nut was a press fit. In other words, once it was too loose to hold, it wasn’t going to get better.

It’s amazing how few YouTube videos are out there on the SainSmart 3018. In fact there were none and only a few on the other machines. There are a number of 3018 machines on the market and many of them are far cheaper than SainSmart. The videos I watched made it obvious why. I became a little happier with my choice with every clip I watched. Unfortunately, I was no closer to a solution.

I was out of options, I contacted service at SainSmart via email. One day later, I was asked to provide a copy of my invoice and a better description of the problem. The next day I had a new head assembly rocketing to me from China. I reported the problem on Sunday and had a new z-assembly by Thursday. Half an hour later I was up and running.

Final thoughts on the SainSmart 3018 PROVer:

It’s taken me a while but I got everything I was hoping for when I bought my SainSmart 3018 PROVer. It will never replace my 3D printer (there’s no way I could ever make emergency plumbing fixtures with it) but there’s a certain magic to wood that will never be achieved with my 3D printer. Nor can I use my Prusa printer to produce printed circuit boards or clear acrylic cutouts.

For a number of reasons I really hate the current trend towards cloud based programs and subscription based software. I understand the reasons but my slow internet makes this almost unusable. There’s also the issue of your designs and constantly changing terms of service. The developers of Fusion 360 are one of the culprits. Their terms are constantly getting more restrictive to force you to subscribe to their services. That’s certainly a legitimate business model but I don’t have to support them.

While testing out a number of possible programs, I found DeskProto 7.0. At the free level, the software gives you all the features you need. The advanced features will cost you. I’m not complaining but I’m fairly I’ll end up buying the advanced version. Even if you don’t like the software, I learned more from their tutorial than from all the other sites.

PS: Just in case it’s not clear who this stunning puppy is, meet Oliver, the 2020 addition to our pack. This was taken right after a fun workout with Ronin.

Outsourcing Our Mind To Gadgets, The Sad Case For Humanity
An Insidious Plot Against Men
A Question About Poor Customer Service
The Overly Contemplative Writer’s Dilemma, How Do I Spend My Time?