Ready For Your Hard Drive To Fail? Make Sure Your Backup Works 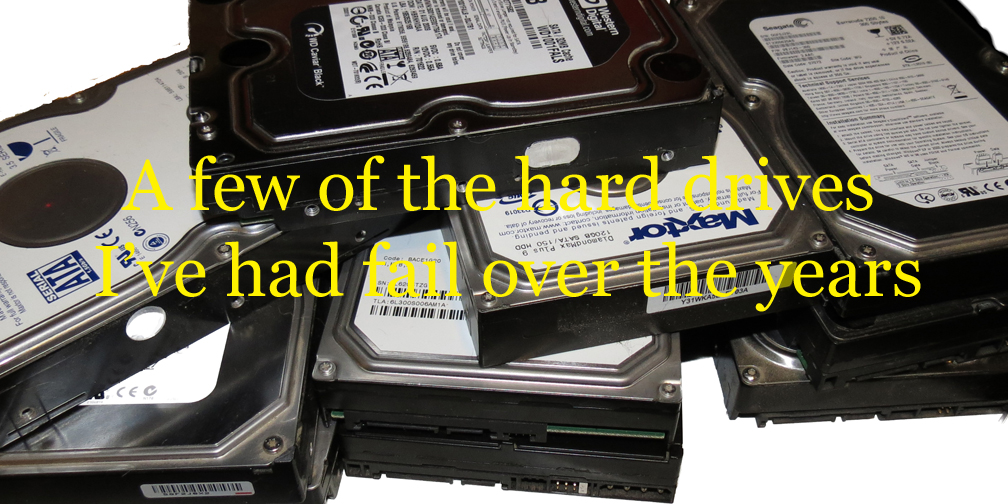 Backup software is a lot like an insurance policy. Until you have an accident you have no idea how good it is. Of course, if you race down the highway at 100 mph, trying to determine what your stockbroker meant when he texted you, “sell immediately,” you’ll probably find out it doesn’t matter how good your insurance is. Such was my case over the last two weeks.

Before I confess to astounding incompetence, let me say I keep my files backed up. All my pictures are stored on M-Disc Blu-Ray. If you believe the manufacturer, these are supposed to outlast standard Blu-Ray disks by decades. Unfortunately, 25 gig just doesn’t go as far as it used to.  I have almost 100 gig of pictures and some 300 gig of videos. That requires a lot of disks. Backing up my entire system with disks is not even a consideration.

I use Acronis True Image to make an incremental backup of my system once a week on a 6 tb drive reserved strictly for backups. I have a love hate relationship with Acronis. What they have works well, it’s their new features that cause me grief. I bought their update last year only to find it completely unusable because they added a backup feature for my phone. Sounded good on paper but it spent 25% of my CPU time looking for my phone, I uninstalled it and went back to their 2015 version.

I should have learned my lesson but this year when they said they were bring back their try and decide feature, they hooked me again. Try and decide allows you to install software, try it out and then restore your system completely if you decide you don’t like it. This is important because uninstall doesn’t always uninstall everything that was installed. Some of those free programs have a bad habit of leaving nasty companions behind.

This year, in addition to the try and decide feature, Acronis had added an Anti Ransomware feature to monitor my files. No problem I thought, since I already have something for that, I’ll just turn it off. Acronis must be really proud of that feature, not only do they nag you when you turn it off, they put a notifier on your screen to tell you it’s turned off. Of course, there’s no way to turn the notifier off.

Taking a swift hop and skip over to another provider with whom I maintain a love hate relationship, my Microsoft update got hung. On my main machine, I still use Windows 7. Yes, I frequently hear people saying Windows 10 is faster and more secure. Funny thing though, i almost never meet anyone who likes the graphic Interface.

Five hours into staring at the updating screen, I finally hit reset and my nightmare was officially started. On reboot, it went right back to the updating screen. This time I gave it a full thirty minutes before I hit reset, entered safe mode and did a system restore. Almost successful, except that I was running at 1/10 normal speed and the boot process never completed.

As an engineer, the next two days should have been filled with the intense pleasure of researching a solution for a problem. Desperation has a way of changing that. As I went through all the normal recovery steps, rollback, repair using the Win 7 distribution disk, sacrifice of a small chicken (well, I considered it,) my problem quickly morphed into a Stephen King novel with no happy ending.

Tip of the week, if you’re going to need rescue media to restore your backup, create it before your disk controller drivers are corrupt. I spent the next two days watching a progress bar as I attempted a restore from my recent backup files. I spent the time wisely, perusing tale after tale of frustrated users attempting to deal with my same symptoms.

Needless to say, my backup restore failed. As I contemplated reloading all my programs, finding all the digital downloads, searching for the software keys I had forgotten to record and trying to remember which version I was using (the latest is not always the greatest), I even considering using my Windows 10 license to do an upgrade(?) of my Win 7 system to Windows 10.

I was confident this would repair all my drivers and enable my system to start properly. Ten minutes into Windows 10 and I realized once again why I hated it. Then I happened to read all the changes coming in the latest update and a rather strongly worded blog suggesting you might want to wait a few weeks before installing the update because early testing showed the update wasn’t playing nice with a number of machines.

Tell me how much better Windows 10 is than Windows 7 all you want. There was no reason but hubris to mess with the Windows 7 GUI. Accepting defeat, I decided to do a clean install of Windows 7. I know sooner or later I will have to give it up but I’m learning to love Linux just a little more every day.

Unlike the unfortunate victims in Mr. King’s novels, I got incredibly lucky. While looking for a disk to save all my current files on, I stumbled onto a drive I had been using as my system drive 18 months ago. It took a while, I had to re-authenticate a number of software packages and reload almost as many but after two weeks I could finally retrieve all my email, 1022 messages. Too bad almost 980 of them were spam. Sigh.

Don’t risk all your memories and history. Be prepared!

So how did this go so bad? It’s not exactly a surprise that most of the problems were caused by me. Windows has two mechanisms for booting based on the structure of the disk, a Master Boot Record, (MBR) and Unified Extensible Firmware Interface (UEFI). We’ve lived with MBR for the last forty years but Intel and Microsoft felt they had a better idea. I’m sure there are advantages but from my point of view, it really looks like an initiative to prevent people from converting to Linux.

Although the disk structure determines the boot type, settings on the mother board determine which method is used for booting. When I used my rescue CD, I selected Windows Boot Manager, my motherboard’s method of specifying UEFI. The forums are full of people that made the same bad decision. To be fair, when you try a repair, Microsoft warns you with, “This disk can’t be used on this version of Windows.” Perfectly clear to me that I should have selected the other option. It would help if the Microsoft forums made that clear rather than letting users suggest ways around the problem.

Apparently I was successful but I still didn’t understand the importance of selecting the boot method through my motherboard’s naming convention and the next few days were a confusion of attempts to boot as an MBR and as a UEFI, with me repairing my drive for my selection of the hour and wondering why I was having so much trouble getting this to work.

It finally dawned on me that the designation mattered and I started consistently using Windows Boot Manager. Had I understood what was going on, it’s possible that I might have succeeded.

Still not exactly at my most brilliant, once I had a working drive, I updated my BIOS to take care of a few other pesky problems. Now I was faced with an MBR drive and a motherboard that would not allow me to select an MBR drive as the boot disk. The forums are full of people that having updated their BIOS, find out their boot drive has disappeared. In my case, although I couldn’t select the drive for booting, I was able to specify my drive when no suitable drive was found.

Back to the forums to learn how to convert from MBR to UEFI, without losing all your data. There are a number of ways. Unfortunately most of the free methods involve repairs using the rescue disk. Turns out I was almost there, too bad my drivers were already corrupted.

If you’re running the latest version of Windows 10, it can safely make the conversion for you. Acronis 2018 says it can convert from MBR to UEFI but given my feelings about their ransomware addition, I was in no hurry to upgrade my 2015 version. Paragon Hard Disk Manager 16 do the conversion but you have to have the professional version and they give you lots of warnings, it’s not for the faint of heart. It’s also not easy to find it on their menu system. AOMEI also advertises their professional version can make the conversion.

In the end, I made a backup of my MBR drive. I then wiped the disk and did a clean installation of Windows 7 after booting under UEFI. Then I restored my backup over the Windows installation. It boots and everything is there but every time a disk is formatted it gets a new serial number. Apparently a number of copy protection schemes use that serial number because I did have to reauthorize a few of my programs. Maybe the paid methods avoid that issue. Then again maybe not.

Shouting Is A Poor Form Of Communication
One Year In The Making, A Blogging Quest
A Dangerous Trend, Amateur Social Isolationists
So Much Knowledge Lost Through Retirement