Windows 10 Versus Chromebook, What Does Intregity Have To Do With It?

I’m writing this on a Chromebook. Think of it more as an experiment rather than a review of Chromebook capabilities. Why? When my wife asked me what I wanted for Christmas, I saw it as an opportunity to upgrade my computer. A little research and I realized that in order to upgrade, I would have to migrate to Windows 10. During one of their patches to Windows 7, Microsoft had disabled the ability to run newer processors. So much for Microsoft’s integrity. I simply do not trust Microsoft enough to migrate to Windows 10. 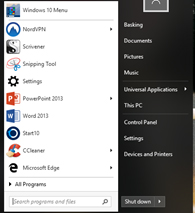 As an operating system, Windows 10 isn’t bad. I have to use it at work and aside from some questionable menu choices, I can navigate through it. My personal laptop is also Windows 10 but I use Start10 from Stardock software  to give it the look and feel of Windows 7. It can’t completely overcome some of the “features” of Windows 10 but it’s a start.

Think of my Chromebook as an exploration into the future of laptops. I’ve always hated it when a company tells me that I’m getting an upgrade and takes capability away. When Neverwinter Nights did that to me, I left the game that week. When Tera released an expansion that nerfed all my characters with the promise of enhancing them, I left the game that day.

It’s not just games, I stopped upgrading Adobe Elements when they started removing features to make my life easier. All of these companies promised improvements while actually crippling your abilities. Microsoft has become a master at telling me how much better they’re making my life.

To me it’s an issue of integrity. If you shrink my candy bar, don’t try to tell me the new and improved version is better for me because it contains fewer calories. Especially not when you also raise your price to cover the “improvements”.

Many, many, years ago, I was working for a small company. Around Christmas, our president brought everyone into the conference room (as I said it was a small company), and told us we weren’t getting raises that year. He acknowledged that it was his decision and he felt he was acting in the best long-term interests of the company. Seldom does the leader deliver that type of bad news in person. Even less often does the leader admit it was his decision.

He could have easily avoided the situation, He could have sent in an underling to tell us, he could have given raises despite the bottom line, he could have kept silent until raises were noticeably absent. None of us applauded him but we were all impressed with the integrity he had demonstrated.

The company grew steadily under his leadership. When he was replaced by somebody having less integrity than the aforementioned candy bar company, fifteen years of growth disappeared in less than two years. Coincidence or inevitable?

This isn’t the first time I’ve caught Microsoft removing features. If you Google “format 64 GIG with FAT 32”, you’ll find a lot of conflicting information. You used to be able to do it. Certainly, there are a number of apps that will do it for you but if you want to use your up to date version of Windows 7 or 10, you’re strictly out of luck. Microsoft wants you to use one of their proprietary formats, because it benefits you as a consumer. Yep, just like that smaller candy bar saves me from having to exercise as hard.

I know, these cases seem minor but how long before they patch Windows to stop running games because the games are so much better on the X-box. You know that Microsoft has already thought about it. Linux aside, the age of the operating system is over. We’ve entered the age of the marketing platform.

I can’t say that my Chromebook is likely to replace my main computer, yet, but it’s good candidate to replace my Windows 10 laptop. I use that laptop for checking email, writing my next great science fiction novel and posts for Opinionbypen. In other words, everything my Chromebook does. Microsoft’s lack of integrity might be opening up a lot of opportunity for Chromebook.

I tried really hard to finish this without taking a poke at our politicians, I failed. Some of our Texas races look like a popularity contest between Attila the Hun and Hitler. In their case, integrity is more of a buzzword than an actual thing. Sort of like synergy, sounds good but almost no one knows what it really means.

I keep thinking about my previous company, fifteen years of growth disappearing in less than two years. Don’t think the same thing can’t happen to our country. Take the time to vote and use social media to let everyone know who you voted for and why. Don’t let the party lines drive us to disaster.

Shelby, We Miss You
Married To An Engineer - Change Is Inevidable, For You
SEO, How You Got Here Without Intending To
Saying Thank You, It's Not That Hard