What’s Amazon Whispersync And Why Do I Care? 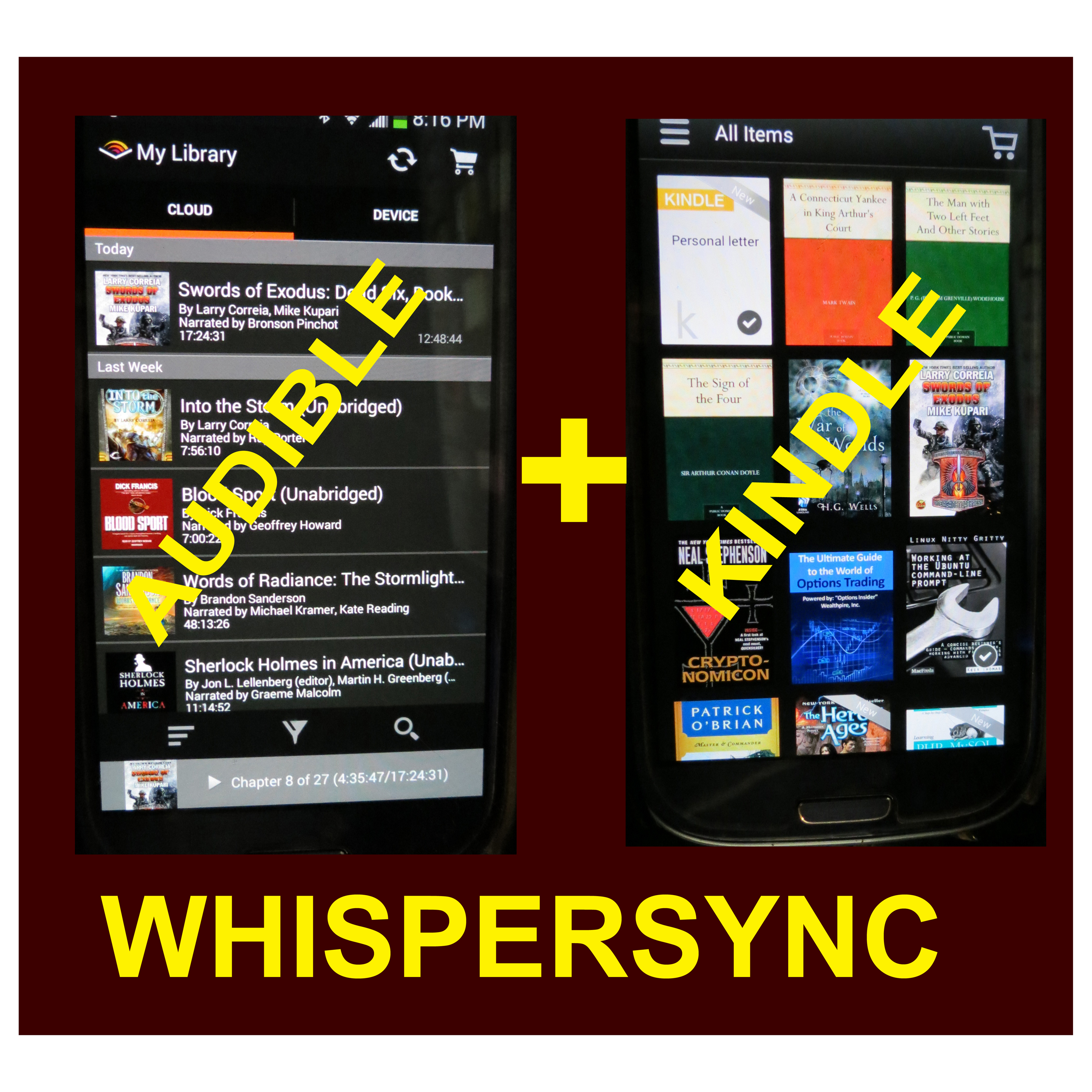 I think I’ve stumbled on a great way to save money on books from Audible. It doesn’t work every time and your savings tend to vary dramatically but when it works you feel like looking over your shoulder to see if the Amazon police are watching.

It’s no secret that I’m a fan of e-books. I was slow to adopt the Kindle but after watching my wife use hers for a year I saw the potential and bought mine. Unfortunately for me, it was shortly after I bought my Kindle that publishers decided I should pay more for an e-version than for a physical version.

I’m sure they had more reasons than greed. I really want to believe that but their pricing practices sharply curtailed my purchasing of books for my Kindle. I was so disgusted by the whole thing that I also refused to buy the paperbacks that were often several dollars less. My wife, usually the more reasonable of the two us, also stopped buying books.

During that time, Amazon did what they could to keep the Kindle concept alive and promoted several new writers. I felt bad about abandoning several of my favorite writers (I still haven’t finished Robin Hobb’s Dragon series) but there were enough new writers to keep me entertained.

It was around this time that Amazon bought Audible. This caused me a lot of concern because I was just beginning to enjoy audiobooks, I didn’t want to see the same debacle follow. Unlike Kindle books, Audible uses a subscription model. You pay a fixed fee per month and get one or two credits a month. You can redeem credits for books, usually one credit for one book, but there are a few books that cost two credits. This works out to about $12 to $15 per book. If you’re short on credits, you can also buy the Audible books. They run somewhere between 99 cents and $60. I’m usually short on credits so I almost always pay cash if it’s less than $12.

Over time Amazon has only made a few changes to Audible. They still have their own website but you can use your Amazon credentials to log in. One less password to remember.

I don’t know when Amazon introduced Whispersync. At the time, I saw very little value to me. If you own both a Kindle version and an Audible version of a book, Whispersync keeps the two books synchronized. Read to page 128 in the book, realize that you have to do laundry, and seamlessly start listening to the Audible version at page 128. Great technology concept but I dismissed it as a way for Amazon to sell me two different versions of the same book.

When a friend of mine suggested I read Master and Commander to get a feel for British naval life, I thought it was a good idea and started my search with Audible, $24.47 or one credit. Tempting but I only had one credit left. When I checked Amazon, the Kindle version was on sale for $1.99 (great timing on my part, it’s back to $9.16 now) but even better if I bought the Kindle version, I could buy the Audible version for $3.99. For less than the price of most paperbacks, I could have both. Maybe there was something to this Whispersync after all.

It turns out that books you bought for your Kindle in the past are also eligible for this. I added two more Audible books from Larry Correia for $1.99 each.

Whispersync won’t provide a bargain every time. Going back to Robin Hobb’s City of Dragons as an example; the Kindle version is $4.74, the Whispersync companion version is $12.99 or about the same as one credit. Certainly no bargain there.

Sometimes the Whispersync combo is a great bargain. Audible also has a book of the day newsletter. Every day they offer a book at a greatly reduced price. Today was War of the Worlds by HG Wells for $2.95. I almost bought it but decided to check this back door first. War of the Worlds, the Kindle version was $0.00 and buying it made me eligible for the Whispersync version for $0.99. I now own both the Kindle and Audible versions and I’m out slightly less than $1.00.

Like I said, it doesn’t always provide a bargain but when it does…

Probability, Statistics and Udacity
What Idiot Designed This? In Defense Of Engineers
I'm Not Insulting You, That's My Aspect Starting Up
Time Travel, We All Do It