Married To An Engineer – Change Is Inevidable, For You

As I wrote in Married to an Engineer Part 1, living with an engineer isn’t for everybody. Not only do you have to put up with someone you often suspect loves technology more than you but living with an engineer will change you in more ways than you ever anticipated. I had time to reflect on just how much my wife has changed while I was doing my equivalent of spring cleaning.

Today’s electronics demand so many outlets you need a power strip or two. Most of these strips come with surge protection. It was pure genius adding surge protection because each time they protect your electronics from a surge, it takes life from them. If you want continual protection you have to replace the strip every few years. How do you know when your surge protectors have given their all and need to be replaced? You don’t, your only choice is to replace the strip every few years.

This usually involves drilling new holes because there is no mounting standard. Adding to this, in an attempt to bolster the bottom line, most vendors no longer supply screws. There seems to be a growing trend to making the mounting slots as small as possible. I’m not sure what size they expect us to use but I don’t keep screws that small. Given that they aren’t providing screws I can only assume the smaller slots are easier for the injection molding.

Anyway, I had no screws small enough to fit the slots that would also hold in sheetrock. Time to modify the power strip. I tried my drill but it quickly became obvious it wasn’t able to provide the right angle cuts I needed.

Thinking about the injection molding process gave me the answer I needed. What happened next involved my oven, a sample screw and the knowledge that I had several hours before my wife got home. The execution was trivial but it did leave a lingering odor of burned plastic. This is where my story starts.

My wife regards the oven as a kitchen appliance for cooking food. I see it as a tool for providing controlled heat. In fact, I tend to regard everything in the kitchen as a possible tool. She’s no longer surprised at finding electronic assemblies in the dishwasher, chemicals stored in the freezer and of course, her oven repurposed as a heat source for vacuum forming, plastic modification and curing various Sculpey objects.

My wife has come to accept these things as one of the hazards associated with living with an engineer. She’s learned to check the oven before turning it off or on. She’s also got a large collection of scented candles perfect for masking the odor of melting plastic or burning electronics. Not liking any of the answers I’ve given, she’s given up asking me why I have a candle burning.

It’s not all bad, I keep all her appliances in working order. I make sure she has the latest in technology, whether she knows she wants it or not. It’s true that our household is a little more complex than most. We have two separate WIFI networks and an internal LAN network. The LAN comes with a Linux file server and 32 terabytes of storage for pictures and backups. Works perfectly, until the power goes out and I have to relog into the server. Still she’s learning.

It took her some time to come around to her Christmas Echo clock and she’s still working through all the bugs in the Echo Auto but she has come to embrace the many benefits of Alexa. The first Kindle in our house was hers. This year, knowing how much she appreciated the aerial shots I was taking of her garden, I bought her a drone so she could arrange the shots to her liking.

Okay, maybe she didn’t ask for a drone but that’s another danger of living with an engineer, we tend to believe that everyone has the same love of technology as we do. We also have difficulty understanding that everyone doesn’t have our intuitive knowledge of these devices.

During our marriage, my wife has had to endure crash courses in computers, tablets, gaming and technology in general. She’s come a long way from that technology shy horse trainer to the person she is today. Although not ready to embrace our Linux file server, I frequently hear her helping her friends through their technology woes. 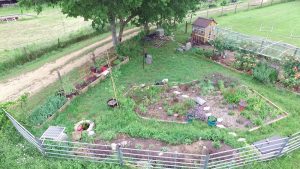 She’s even learned to accept the intrusion of technology into her tranquil garden as a necessary evil to provide power for her chicken’s fan and to power the waterfall in her garden pond. I’m sure she doesn’t notice the solar panels any more.

In the last few years I’ve noticed that her arguments contain more logic than emotion. While I applaud the growth, I’m winning fewer arguments. Even so, it only goes to prove my point.

Ready for it or not, living with an engineer will change your life in more ways than you ever expected.

VR Goggles, I Still Look Like A Geek When I Wear Them
First Impressions
Ramsay Hunt Syndrome, Three Years Later
Class Action Suits, A Way To Balance The Budget?