Married To An Engineer, Why Can’t I Have A New Oven

I wanted my wife to write this from her point of view because if anyone in this marriage has suffered, it’s her. She wants a new oven and I continue to repair the old one. As long as it continues to work, why do we need to replace it? I realized just how different my way of thinking must seem to her when she caught me attacking our compressor with my Black and Decker power saw. Although I didn’t mention it in my post on farm life, a good compressor is a necessity of life on a farm. You can’t drive the tractor down to the local service station to air up a low tire. And while I’ve never tried it, I’m sure my AAA membership doesn’t cover farm equipment.

My Mother-in-law often comments on how lucky my wife is to be married to me. No it’s not my ruggedly handsome looks although I do get mistaken for Colonel Sanders ever now and then. She’s simply praising my talent for fixing things and it’s very true, I can analyze most situations and determine how to fix it. Cars, appliances, computers and plumbing all seem to come naturally to me. What my Mother-in-law never sees is the down side to all that.

It’s true, I can and do repair most of our appliances. Our oven is almost 30 years old. Our refrigerator is pushing 20. I’ve had to repair our freezer three times. When the power door lock went out on my wife’s truck, I replaced it myself. If I had known I also had to remove the window to replace the lock, I might have asked the shop for a quote but I was already committed by the time I discovered that small detail.

When our almost new compressor stopped working, I needed to open the case in order to fix it. Unfortunately, one of the banes of country life, mud daubers, had built nests in the last two screw holes holding the body together. This caused the screw heads to become so corroded that I saw no other options but to cut the two screws. To my wife, I was about to cut up all the electronics buried inside the compressor case.

I’ll have to admit the scene did look reminiscent of a horror movie. I’m standing over my compressor with the power saw ripping into its body when she asks me what I’m doing. As I stand up, power saw still in hand, I can only look at her and say, “Fixing the compressor.” I’m sure she felt reassured. Maybe not. She was probably wondering how much longer I would keep up the farce before I borrowed her truck to get a new compressor.

You see, from my wife’s point of view, my ability to repair these things is not always a good thing. In fact, it almost ensures that she will never have the latest and greatest in kitchen appliances and she really wants a new oven

To me all the advances in oven technology over the last thirty years are simply opportunities for functions to fail. If you read any of the reviews on major appliances, you’ll quickly encounter horror stories of appliance logic boards costing 75% of a new appliance and nobody repairs those boards, they always have to be replaced.

Take a look at it from my point of view. We’ll use the oven because it’s the appliance my wife wants replaced the most. Of course, we have an electric oven because I can fix one. Modern ovens have really nice concealed heating elements making for easy clean up and an unblemished surface. Replacing one of those heating elements requires removing a large glass panel that has been carefully crafted to ensure I don’t do it myself. On mine, I simply pull the old heating element off and push in a new one. Very fast, very easy and only about $30 per heating element.

I’m at a loss to explain how a microcontroller makes the oven better but we’ll assume better temperature control and a timer function. They might even try to claim higher energy efficiency but that’s hard to do. True, 425 on my oven probably varies anywhere from 400 to 450 but once you know that it’s easy to compensate. I’m sure the modern ovens are far more precise and allow you to assume that 425 is always 425.

Being one of the better 1980 models, my oven has a big timer that can be set to give a buzz at the end of a set time, as long as the time is less than an hour. You can also set it to start and stop baking with an accuracy of about plus or minus five minutes. At slightly over $100, this is the most expensive part of my oven to replace.

In other words, anything that goes wrong with my oven, short of a tree falling on it, can be fixed by me for less than $100. Were I to give in and buy her a new oven, the increased functionality is low, the level of expertise to repair has deliberately been set high and the cost of repair escalates dramatically to 70% of the new oven. Reminds me of the ink cartridge scam we all suffer from. Yes, I might get a two year warranty or even an extended warranty but once the warranty runs out….

I have nothing against technology. I replaced both the washer and the dryer before they broke (I did learn something from my dishwasher debacle). Neither appliance was doing its job and it would have taken a new motor and transmission to repair the washer.

The classic answer here is that a new oven would look better and while I agree, I have a hard time trading in a perfectly good, functioning, repairable, oven in on one that will last two years before I’m told that it’s cheaper to buy a new oven than to fix it.

What’s your opinion? Is my wife right and a new oven is essential for baking or should she be happy with the one she has now, secure in the knowledge that I’m willing to bring food home occasionally because I’m not making payments on a new oven?

Oh, just in case you were wondering, the compressor is doing fine. My problem was the thermal overload sensor mounted on the motor. Apparently they don’t intend for you to replace those yourself because I had to order the replacement parts directly from China. I had to buy ten but the total cost, shipping included, was only six dollars. You can barely see the duct tape holding the case together. 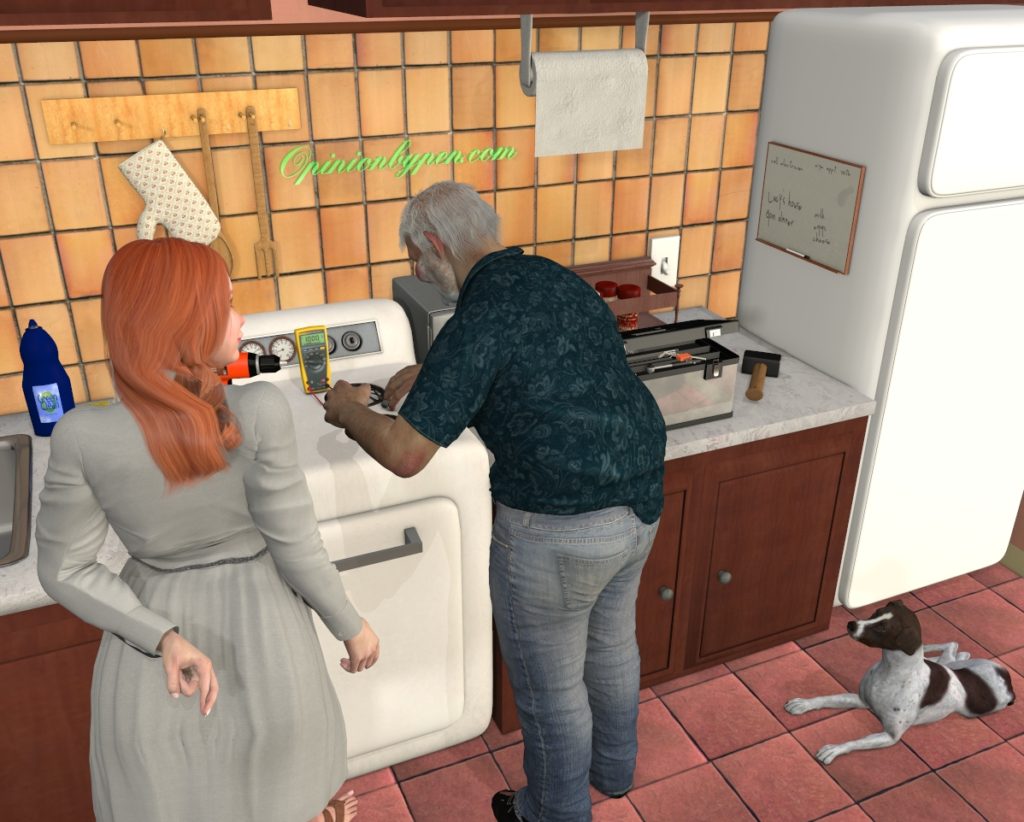 Is It Murder If You Club Your Beeping Carbon Monoxide Detector Into Silence?
Are You Blocking Me Again Or Is It My ISP Cache?
Making Decisions Based On Website Data
Daylight Savings Time, A Tale Of Two Time Zones