The Internet is littered with dead and abandoned websites. You know the signs, most of the links no longer work, the last post was over a year ago and nothing is up to date. For every website that succeeds, there’s a hundred that don’t. The reasons are varied, not enough time, too much effort, not enough traffic or simply a change in interests.

You might wonder why someone would continue to pay for a website they’ve abandoned. I can’t speak for anyone else but when I started Opinionbypen I paid for three years of hosting because GoDaddy gave me a great deal on three years of webhosting. Had I decided to abandon it in year two, and I almost did, I probably would have simply stopped posting.

Some people probably continue paying because they don’t want to admit failure, “I know I haven’t looked at it for three years but I intend to get back to it. I have some great ideas.” Anyone want to put odds on that owner ever getting back?

Unfortunately, abandoned websites tend to breed crime just like abandoned houses. These are prime targets for hackers looking for websites to host their malware. The owner quit updating it long ago making it that much easier to crack. 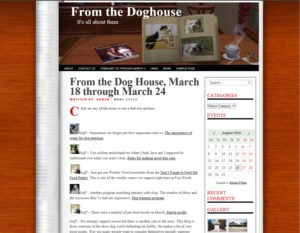 To my intense shame, I was one of those owners. I started with good intentions. Several years ago I found a promo that offered a year of web hosting and a domain name for $10. Thinking this was too good to pass up and having a great idea, FromTheDoghouse.com was born.

The idea was simple, use pictures of my dogs to act as reporters on canine news and get other people to submit news links under pictures of their dogs. I got my $10 worth but every time my website started gathering momentum, the hosting company shut me down for too much activity. I finally called it quits.

Of course there were other reasons, I came across stories of horrific animal cruelty on a daily basis, all the dog food recalls and then there were all the fanatics who defended their particular view of canine diets as strongly as any religious zealot. Not willing to give up (wonder where I’ve heard that before), but wanting to take a break I put up a summer vacation picture and took a three year hiatus. I also said goodbye and good riddance to my cut-rate hosting company six months early and moved my site to GoDaddy. 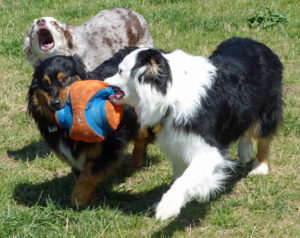 During an average week FromtheDoghouse probably had over a thousand visitors looking to leave spam or hack the website. Oh, it also managed to get one or two legitimate visitors a week. I’m not a complete fool, since FromtheDoghouse was now hosted on the same server as Opinionbypen, I made sure I kept it updated.

It took me a while but I finally realized I could set up a page showing some of our favorite pictures as a replacement for FromtheDogHouse. Even better, I could redirect visitors to FromtheDoghouse.com to this page. Now I only have to support one website and my pack gets the website they deserve. I’ll add to the pictures as I feel like it but now I have a great excuse for taking the pictures.

Fromthedoghouse is a new beginning for an abandoned website. Feel free to come by and leave a comment.

One last thing, if you’re really proud of your dog and want to show him, or her, off, send a picture of your dog to admin@fromthedoghouse.com with their name and I’ll add the picture to the guests column.

Are The Engineers In Your Life Ignoring You? What You Can Do About It
A Dangerous Trend, Amateur Social Isolationists
OTR Mobile, A Review
My Adventures And More At Amazon WriteOn