Married To An Engineer – Part 2 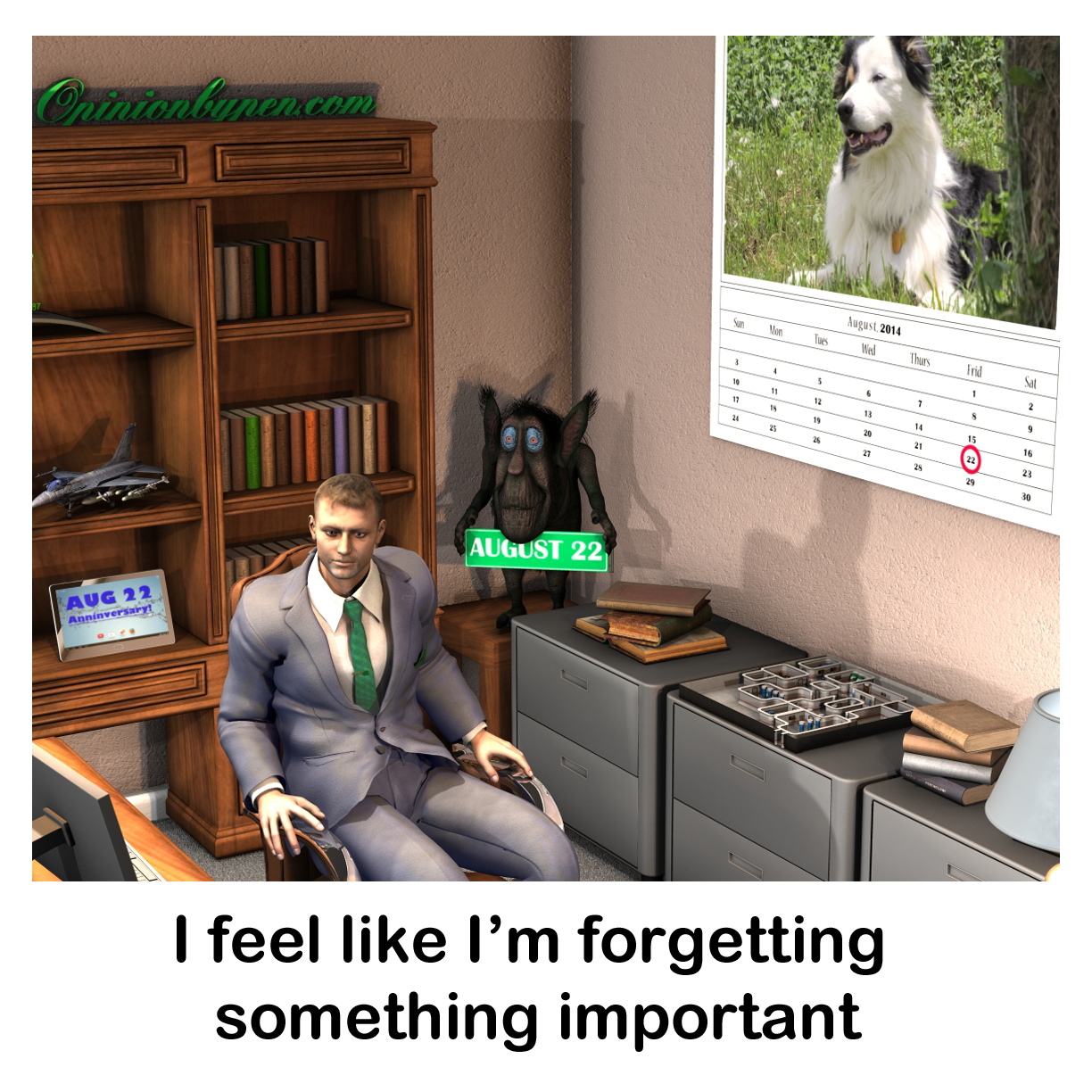 It’s happened again this year, once again I’ve forgotten my anniversary. Every year that it happens, I swear it won’t happen again. I’ve set alarms on watches, PDAs and smartphones. I went so far as to enlist my Mother-In-Law’s help but every once in a while all those mechanisms fail simultaneously and I’m left red faced, empty handed and apologizing to my wife.

Fortunately for me, my wife has lived with me long enough to realize it’s not that I don’t care, time just has a different meaning for me. I don’t know if this is an engineering thing or not but birthdays, anniversaries, even holidays disappear faster from my memory than last year’s hard drive prices.

The solution came to me as I was berating myself for forgetting again this year. I know there are a lot of ways I could do this, apps, reminder services, calendars but I needed a solution I could rely on, myself. The only problem is that I need the government’s help to do this.

It’s unlike me to turn to the government for help in a crisis but I’m desperate. I know, Congress is barely (questionably) able to help themselves in a crisis, but these are busy men and women who have undoubtedly missed an anniversary or two themselves. I think my solution might work.

On a regular basis I fill out a lot of forms, loan approvals, bank applications, tax returns, license renewals and so on. Every one of them asks me for my social security number, my driver’s license number, my birthday but not one of them requires my anniversary date.

I’m not asking you to use the data, you don’t even have to store it. I’m only asking you to request the data on your forms as a constant reminder to me. Think about all the men and women you would save from the embarrassment of forgetting their anniversary. You see, I know the date, I just don’t always see its relationship to today’s date. If I had to write it down, 8/22, and I saw it in relationship to today’s date, 8/22 I would realize I had a problem without having my wife give me a condescending glare and a “you forgot again didn’t you.”

I know some of you are already complaining that this is a stupid idea. You have no problem remembering dates. You have no idea how bad it feels to forget. It certainly wouldn’t be the stupidest thing I’ve seen on a government form. How many times do you see Birthday (xx/yy/zzzz) followed by Age? Is this a secret test of my math skills or an admission of poor math skills on the part of government?

Sorry, I forgot myself. Here I am asking Congress to save marriages all over the country by requesting a small piece of data and I’m taking cheap shots at them.

Men, women, if you’ve ever forgotten your anniversary, avoid the embarrassment of forgetting again and forward this to your Congressmen.

Congress, I know I’ve said some harsh things about you in the past but here’s your chance to be heroes. Make it mandatory for all new forms to request the person’s anniversary date. Nobody has to store the date, nobody has to track the data, you only have to make mandatory.

Elections are coming up and this would go a long way to improve some of those negative ratings. This solution has family values written all over it.

The Plan, How My Wife Became a Gamer
How Much Memory Is A Megabyte?
The Demise of the PC, Where I Blame Everbody
Windows 10 Upgrade, Can You Trust Microsoft?