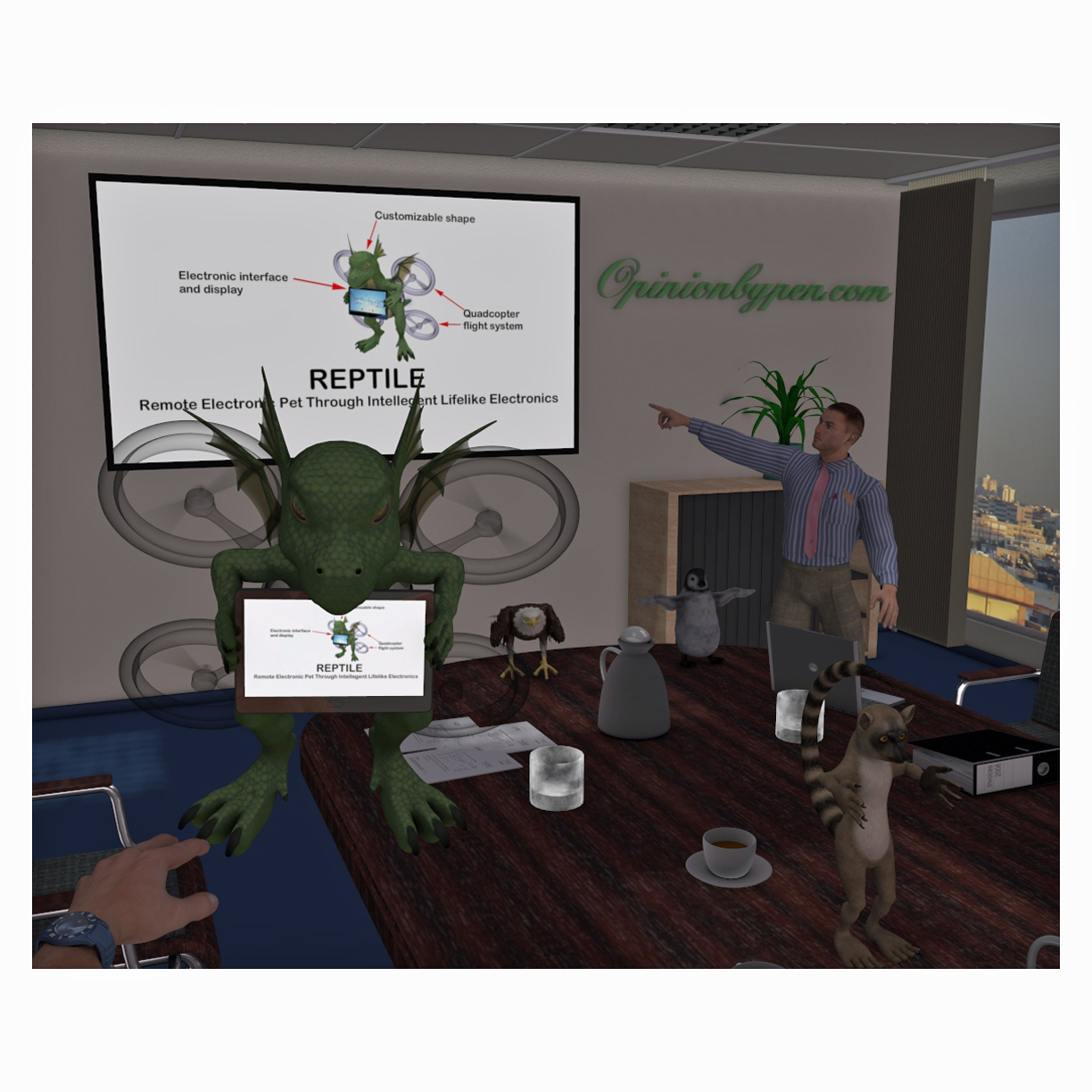 Today’s post doesn’t fall into any of my normal categories. It won’t educate you or make you think about an issue. It won’t give you a better idea of how to cope with an engineer (although you will see the imagination that my wife has to put up with). No, today I’m sharing a futuristic design concept, REPTILE (Remote Electronic Pet Through Intelligent Lifelike Electronics). I’m not asking for money to develop it nor am I asking for royalties when it is developed (although a first edition would be appreciated).

I want you to think about a blend of two technologies that are beginning to mature, the smartphone and the quadcopter. A flying phone? Don’t worry, I already know you think it’s a stupid idea but hear me out. With Apple’s Siri and Google Now, we’re seeing more vocal interaction, bringing our smartphones closer to the dream promised by the original PDAs (Personal Data Assistant).

Your watch is becoming a remote to your phone so why not make your phone truly mobile and let it fly. Not like the interactive quadcopters we see today. I’m suggesting something fully autonomous. If you need to see the screen, it flies in front of you and hovers in front  of you, no hands required.

If you don’t have a good signal, you send it flying up to find a better signal. As long as it stays in the range of your earpiece, you can have a great signal. Forgot where you left it? Click your watch and it flies to you.

If you want a great picture or video of something, you tell it where and how high. You can tell to follow you to you make you the star in your own movie. Avoiding all the other flying devices might need new technology but this is a future concept, I don’t have to design it today.

Some of you have already realized I’m describing a very intelligent robotic pet. Sooner or later people would start customizing them to look like animals, space ships, aliens or anything else they fancy. With very little effort these pets will have added features making them even more lifelike and expressive.

Why do I find the concept so fascinating? Because it’s so close to reality. We already have drones smaller than a bird that can fly autonomously. Our phones gone far beyond simple communication and have reached a stage allowing them to interact with us based on verbal cues and gestures.

We’ve started giving them pet names and customizing them to reflect our personality. They’ve gotten so big we find it necessary to use earpieces and watches to communicate with them. The next obvious step is to give them mobility.

I imagine the first ones will be designed to sit on your shoulder and recharge through a charger you carry on your waist. Anybody for a shoulder dragon? You know you want it. Don’t like dragon’s? Buy the parrot or flying fish model. You could even them in team or company logos.

I can already see the company memos banning them from meetings and production areas. That’s not a problem, design them so the smart phone is removable. Although once you get used to having your flying companion, you’ll resent those memos.

Why do I tease you if I don’t intend to develop one? Good question. Maybe I will have to teach you something about engineers. Engineering is seldom one engineer coming up with a concept and developing all the needed elements into a product. Engineers are more to design using elements and principles developed by other engineers.

No offense meant to my Mother-in-law and her faith in Steve Jobs, but he did not invent the computer. His genius was in taking pieces that other engineers had developed and putting these pieces together in form that was producible, affordable and appealing to the customers (I know that other people also deserve credit in the design of the original Apple but my Mother-in-law doesn’t have stuffed figures of them standing by her computer).

Being able to visualize the use of existing elements and refine them into a design is a good description of what an engineer does. If you’re designing bridges, you don’t design the steel and the concrete that goes into them. You use your knowledge of these elements to come up with a design that’s producible. You don’t make your design dependent on a locational tolerance of 0.1 inches when you know your survey crew and GPS won’t get you that close. You know what to expect and your design reflects that.

It’s the same for electronic designs. We take existing technology and apply it. Sometimes we give the technology a push, as in demanding batteries with higher capacity, but we are limited by the technology of the time. The first Apple did not have 8 gigs of memory because it would have to be the size of car to hold all that memory.

I’m sure that my shoulder dragon (as much as I want one) can’t be built using today’s technology but by throwing this design concept out into the public domain, I’m hoping that some bright young engineer looks at the concept and thinks to himself, “I could build this.”

I’m not asking for credit but you could send me that early prototype you were going to throw out anyway. I’d really appreciate it.

Email Scam or Luckiest Man Alive?
The Challenge of Blogging and an Offer
Wilson Cellular Signal Booster, a Review
Windows 8