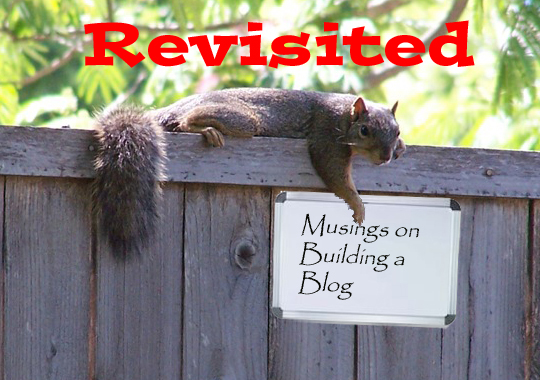 Two months ago I posted about the mistakes I made in starting this blog. It’s in my nature to review the changes I’m made since then and give them an objective look.

The most obvious change is my theme. I know I said that I wouldn’t but as I also said, it was something I could do. I like the new format. I really like the way it presents random posts and the News section allows me to do small updates and miniposts. Making those changes forced me to develop some understanding of CSS and PHP. It also caused a flood of bots to my website.

I’ve mentioned before that the number of bots visiting my site far outweighs the number of real people. My site gets indexed on a daily basis by Google, MSN, Bing and a number of others. For some reason Google Feedfetcher reindexes my pictures on a regular basis. What I did not realize was that the theme I use appends the size of the picture to the file name. When I changed my theme the size of the pictures also changed, changing the name of all my pictures. I was flooded by Google Feedfetcher bots from all over the world looking for the picture I used on my Probability, Statistics and Udacity post. I finally resolved it by copying the picture and giving it the name all the bots were looking for.

In order to draw more people to my site, I’m paying much more attention to SEO. This resulted in a number of changes to the way I write my posts and a substantial increase in traffic to my site. I even did a post on SEO.

This introduced me to another term, bounce rate. While better use of SEO increased the traffic to my site, it didn’t mean that the people directed to my site found what they were looking for or even found it interesting. Bounce rate is how many people stay to read another post or two. Low bounce rates indicate the visitors find your site interesting.  A bounce rate of 30% is considered very good. Some of my posts had a bounce rate of almost 100%. With those numbers it’s obvious I still need to improve my writing.

I’ve also started using Twitter, both to announce new posts and to make occasional comments. Twitter makes it easy for people to share common interests. Both my Probability, Statistics and Udacity and my Dragon Naturally Speaking posts were retweeted making them some of the most popular posts I’ve had. I’m still struggling with some of the concepts in Twitter. Use the @ symbol in front of a Twitter name, put a # in front of a category and keep the message below 141 characters. I have yet to use a #, although #nbcfail certainly seems to beg for a comment or two.

I’m still trying various topics to see what people like. I can write about Udacity and ensure a lot of people will view my post. I tried reviews. I’ve had very good success with my Dragon Naturally Speaking review and very little views of my Adobe Premier Elements review. Any post I make on my dogs ensures a steady stream of people come to look at it. I would have hoped that Google Wallet would have worked out all the kinks but my posts on Google Wallet and PO boxes is still producing a significant amount of traffic. I really hope the people at Google Wallet read it.

No one ever said this would be easy. I’m happy with the improvements. It’s been a fun ride of exploration so far but it’s also obvious there is still room to improve. Too bad Udacity doesn’t offer a writing course.