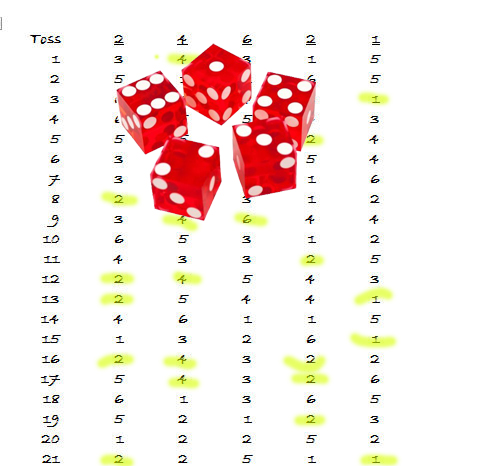 While going through college I worked as a security guard. This was almost perfect for me as a college student because when I was not walking my rounds I was expected to stay at my desk  where I could study. The work was easy and with only a few exceptions very low stress. During the summer, I had very little to study and boredom often became an issue.

Like most of my engineering class, I often played Risk when we would get together for an evening. I don’t need to go into the details but if you could roll a six every time, you would be unbeatable. One evening while at my post I found I still had several dice with me. This was a perfect time to practice my dice throwing techniques.

Most dice today are made of a high impact plastic. This is intentionally done to insure lots of bounce and to mitigate attempts of skill in trying to throw for specific numbers. After a few hundred tosses and some study I realized that any efforts I made to throw the die for a specific number would be seen for exactly the effort it was.

In that case, how about telekinesis? Actually influencing the outcome of a roll by concentrating on a specific number. The probability of rolling any number on a die is one in six. Statistically speaking I should see about 17 sixes in one hundred rolls.

At the time statistically significant had no meaning for me so I was always impressed when I rolled my number more than 18 times in a set. Not surprisingly this was fairly often. I was convinced that I was telekinetically gifted. I just needed more time to perfect my skills. Fortunately summer ended and I had to resume my studies before I left to earn a living in Las Vegas.

I bring all this up because Udacity is now offering Intro to Statistics – Making Decisions Based on Data. I tried my best to just to stick to one course for this period but between Logic & Discrete Mathematics and Intro to Statistics, I could not bring myself to select just one course. Once again I’m signed up for two courses. If I do well, I’ve promised myself a vacation in Las Vegas. There’s always the chance that I have undiscovered talent.

Update Jan 28: I took the Udacity Statistics course and really enjoyed it, Thank you Udacity. I’ve even started using what I learned in the course, What are the Odds. Unfortunately they canceled Logic & Discrete Mathematics, no Las Vegas for me. At least not this year.

I'm Male, My Stubbornness Comes Naturally
The Way We Present Numbers Reveals A Lot About Us
How To Identify An Engineer
Too Good For Your Career?