Is Windows 10 So Bad I Should Consider Using Linux?

If you’ve ever been frustrated to tears by some of the “enhancements” Microsoft has added to Windows over the years, sooner or later you’ll consider using Linux. As I’m writing this on my Windows 10 laptop, Microsoft has already told me that my version of Word is out of date, asked me if I want to upgrade and informed me that using Microsoft’s Edge browser takes one third the power of the Chrome browser I use. I guess Microsoft feels that giving all of us a free operating system means they can use our computer to serve us ads.

Before you consider using Linux, I want to share some of my experiences. Many years ago I put together a file server using spare computer parts. My plan was to give a common storage area for pictures, videos and system backups. Yes, it’s the same concept that Apple, Amazon and Dropbox use for storing pictures in the cloud but remember I’m handicapped by my DSL connection. At my blazing fast 1.2 megabits per second, it would only take the best part of a month to back up my 100 gig or so of pictures. I shudder to think about how long it would take when we add my Wife’s pictures and videos. The server did its job admirably.

As picture sizes and video resolution grew, so did my need for storage. I’d used XP to set up the file server because I had a spare XP license. At the time I did not realize just how easy Windows XP made file sharing. This system served me faithfuĺly for a number of years but i could feel technology creeping up on me. I tried to upgrade it with a Windows 10 installation but gave it up after a long frustrating weekend. At the time my network consisted of two Win 7 boxes, two Win XP boxes and three Linux media players. For reasons best known to Microsoft, Windows 10 would only talk with the two Windows 7 boxes. I know Microsoft wanted us to get rid of XP but this behavior only made Windows 10 useless for my purposes.

When it became obvious that technology was forcing me to upgrade if I wanted to take advantage of things like USB 3 or hard drives greater than 2 TB, I considered my options and decided this was the perfect project to learn Linux. I already had the hardware, the software was free and this would force me to learn a new skill. All I had to do was get it working before my wife got home from her dog show. I had three days. How hard could it be?

Having decided to try Linux, I had to decide on a version. I won’t try to go into all the distros (that’s Linux for distribution version) but Linus comes in a number of flavors, SUSE, Ubuntu, Mint, Debian and a few thousand more. Each distro is subtly different from all the others. Think about the difference between Windows 8 and Windows 8.1.

What I did not understand at the time was that each version has a different library of compatible apps. I started out with Ubuntu because I was told it was one of the more popular versions. My first decision and I was already headed down a bad path.

When you discuss Linux, the obvious comparison is to Windows but you’ve already seen what the Linux people have to do just to see the contents of a directory, “sudo ls -h /chicken/pictures,” or something to that effect. There’s a reason most of us aren’t still using DOS.

You can do almost everything you want in Linux without resorting to obscure DOS like commands but you can’t modify your system. For that you’re suddenly reduced to the command line and line editors that should have been obsoleted decades ago. Linux people tell you this is for security. Then again Microsoft tells you Windows 10 is an improvement. I suspect there’s an element of truth in both statements. 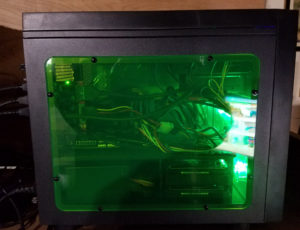 Back to my choice, it turns out the current version of Ubuntu doesn’t support Samba (the file server program I was trying to use). In Linux it’s supposed to go something like “sudo apt-get install Samba,” except that the current version of Ubuntu has a bug and doesn’t correctly load all the other apps Samba relies on. Several ounces of caffeine later, I finally realized that in Linux, versions matter. When an expert tells you how to overcome a difficulty, it may or may not work for your version and very few experts were giving the version number with their guidelines on how to set up a Samba server in Ubuntu. When somebody at work suggested I try Mint, I was only too happy to flush away Ubuntu.

Mint correctly loaded Samba but I ran into a wall trying to share anything except the public folder. In my quest, I had to learn all sorts of arcane skills like editing the fstab file, how to configure my smb.conf file, how to recover from a fatal error when you mistype a file format and how to find the UUID of a drive in Linux. True Linux people would sneer at these achievements and a Linux security expert would weep at the configuration I ended up with but it worked. 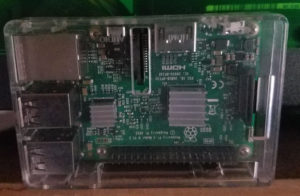 Two weeks later, while my wife was away on another dog show, I took what I had learned and converted a Raspberry Pi to act as my file server. The Raspberry Pi uses a version of Linux called Raspbian and indeed, I had to learn another set of commands to integrate my Pi with the network. Simply amazing, a computer requiring one hundredth of the volume did just as well and it was able to keep up with simultaneous demands from all three media players.

Fate is smiling on me. I now have an up to date file server that is no longer dependent on Windows, a working knowledge of Linux and my wife is still talking to me. To be honest, my Linux server seems just a shade more stable than my former XP server and quirks aside, the XP version ran for almost five years without maintenance. That leaves me with one last item to share;

What did I learn about Linux?

Linux is evolving. As more and more people realize Microsoft and Apple don’t have our best interests at heart, they will migrate to Linux. With many of these people will come new graphical applications for Linux to fill the void they feel. Then again, as more and more people realize a desk computer is overkill for their needs and migrate to tablets and phones, the changes might be too little, too late, for both Linux and Microsoft.

A Guide To Your Valentine's Day Chocolate
WW2 and Hacked Email Accounts
ESD Training, A Poser Opportunity
A Brief Guided Tour of an Engineer's Thought Process