How To Get A Solar Powered Potting Table. Married To An Engineer

I’m not going to say I was manipulated into my solar powered potting table but looking back at it, the signs were there. Shortly before our anniversary, my Wife started showing me potting tables made by other men for their wives. The thing was, none of these tables looked like they would last a season. I’m not a great woodworker by any means but I know how to operate a battery powered screwdriver. Key point to all the wives out there, scale the challenge to your engineers abilities. If these had been exceptional benches, I would have said they looked nice and gone back to reading.

Next, She asked me to repair her old potting table, telling me it was good enough. This was a subtle move. By asking me to repair her old table She could tell me what features She liked and which were window dressing. This also forced me to see the weaknesses in her current table and how poorly it was built. By telling me it was good enough, I wasn’t being pressured to build a better table, I was getting to improve on an existing design. The challenge was up.

Just to give myself more of a challenge, I modeled the table using my 3D modeling software. This was the first time I’ve modeled individual boards but I wanted to get an idea of how much wood was required. I even rendered the table with wood to give Her a good idea of the final product. You can see there were a few changes along the way as I determined how much wood I had.

When I got to the mixing basin, I had a conflict, the basin removed too much area from the surface. How to provide a basin and surface area too? Engineers seldom want to reinvent the wheel. We like elegant solutions. If you’re having to deal with a second rate, overly complicated solution, don’t blame the engineer. It’s not that they didn’t know a better solution existed. Blame our current patent system. In this case I happily copied the solution from my Wife’s RV and designed a removable cover over the basin to provide more area. 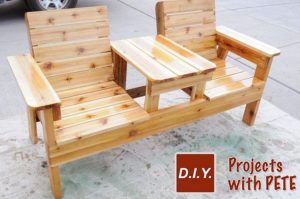 No, I haven’t built one yet but Pete’s site is full of great projects

There’s no easy way to say this but my life is cluttered with the remains of unfinished projects. In this case I already had the cedar wood for an outdoor double chair bench but could never decide on how to utilize the space between the two seats for storage. To me, not using that middle space for storage is an insult to the engineer in me. Surprisingly the amount of wood was almost the same. Time to cut wood.

I had just worked out the idea of using magnets for the cover and because She also wanted the basin to be easily removed for washing, I added magnets to the boards on each side of the basin. In the interest of saving wood, I decided to use a wire frame as a back. My original thought was some light fence wire but decided repurposing a feedlot panel made a lot more sense. Of course, She wanted a bright yellow. Pro tip – don’t try to spray paint a fence panel. You end up wasting a lot of paint.

Here’s where I went off the tracks. I was almost finished when She mentioned lights. One of the overachieving husbands had embedded decorative lights in his table (yes, I recognize the irony here). “Too bad you are so close to finished,” She said, “how can I brag about it without lights.” Classic motivation method, amp up the challenge if interest seems to be flagging. Apparently being able to recognize the technique provide no protection against it. No way I was going to stop now

Given the location, A solar powered potting table was the only choice. Now I needed waterproof switches, lights, solar controller, battery and a place to mount them all. I succeeded but there are obvious signs of no planning.

To the details. The solar panel is 10 watts. The battery is 12 Amp/hour. The spot lights require 0.1 amps each, The LED striplight draws a massive 5 amps. This is the limiting factor. She has a maximum of two hours with the strip light. Both spotlights could run the entire night.

Assuming a 50% factor for efficiency and location on my panel, the battery requires two full days for a full charge. That’s a reasonable design trade off. Thanks to the mosquitoes, my wife is unlikely to use the lights frequently or for long periods of time.

Was I manipulated into building the solar powered potting table? Only one person knows for sure and She’s certainly not telling, She’s too busy potting fig cuttings. 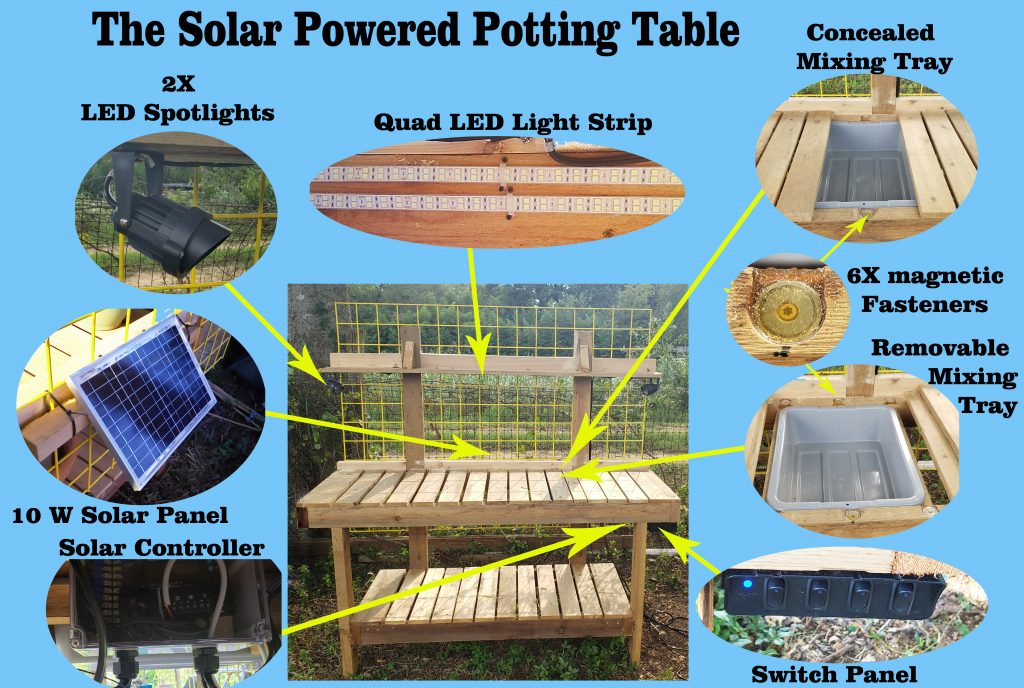 For those of you that really want the details, the wiring is essentially the same as the wiring used in my updated chicken coop fan post. The only real difference is that I used a different solar controller. I went with one from Renology. I can’t say it’s any better but it’s slightly smaller and they actually talk about four charging stages rather than staying on full charge.

Great Appearance, Good To Have, Bad To Vote For
How To Convince Your Spouse You Need A 3D Printer
The UP! Mini 3D Printer, A Review
Married to an Engineer, It’s More Complicated Than You Think