Is It Murder If You Club Your Beeping Carbon Monoxide Detector Into Silence?

I like to think that my wife has learned a lot from me about dealing with recalcitrant electronics. Still after analyzing the situation,when she uses a hammer to completely destroy a beeping carbon monoxide detector in her RV, I find myself applauding her initiative.  To make it worse, I realize I can only blame a fellow engineer for her lack of options. 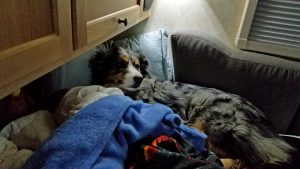 Ronin, after the first beep

Let’s review exactly what happened. It’s twelve midnight, after a long day of agility, my wife and her dog, Ronin, are both sound asleep in her RV. Cue the ominous music, suddenly there’s a beep. Ronin is immediately awake. My wife takes a little longer to wake so she misses the first beep. She’s still trying to go back to sleep when she hears the second beep.

Given the limited size of her diminutive TAB RV, it doesn’t take her long to isolate the beep to her carbon monoxide detector. It’s not the fast-angry beep of an emergency situation, rather it’s the slow annoying beep of a dying battery. A quick study of the manual (I’m so proud of her) makes no mention of a battery. Step two, using her phone to Google the situation says this is the battery (okay the information was completely bogus but did I mention how proud I am). 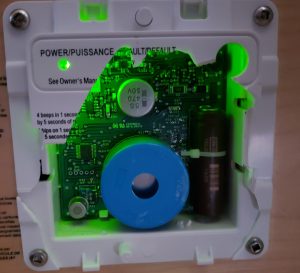 Meanwhile Ronin, not having read the instruction manual, is positive the world is coming to an end and has to be evacuated to the truck. With Ronin safe in the truck, she pulls out her tool kit and starts trying to remove the cover. Adding to her frustration, the only visible screws are square security screws. Slowly she comes to a fateful decision, sleep now and face my wrath two days hence or sleep in the truck for the next two days. With her decision made, she takes out her hammer and puts the carbon monoxide detector out of her misery.

When she returned home, she explained what happened. A study of the manual and the Internet convinced me that her hammer was absolutely the best course. What kind of idiot (engineer) designs something that requires a hammer in the middle of the night?

Let’s go through the details. Totally absent from the briefing we received when we bought the RV and buried away in the manual was the fact that this unit dies after seven years. When it reaches this stage, the lights flash and the alarm sounds, continuously.

No joy here though, the RV is only two years old and the engineers put some thought into this mode. Press the test button and the alarm goes silent for 48 hours. Only once but that should allow you to get some sleep. Well done.

It does have a battery but the battery is soldered in

Unfortunately, there’s another mode with no way of silencing the alarm. If the detector detects a fault, exact issue undetermined, the audio chirp will continue until the fault is cleared. I have no idea how they expect you to do this when they give you absolutely no clue what’s wrong but, in this mode, the only way to silence the alarm is to clear the fault. Well that or beat it senseless with a hammer but you won’t find that remedy in the manual.

I understand that lives depend on the alarm working correctly. I know that if you make it too easy, people will simply switch it off and forget about it. My wife got to restock the freezer because I  turned off the freezer alarm and forgot about it. Obviously when lives are involved, the stakes are much higher and the likelihood of being sued for making it too easy goes way up.

Maybe that’s why you can’t shut it off. It’s safer to face irate customers than to face lawyers. If something happens after the customer has beaten the detector into submission, well then, it’s obviously the customer’s fault. Me, I still say it’s because the engineer was lazy. That or bullied into a poor solution by a lawyer.

I find myself siding with my wife on this issue, sometimes the only solution is a big hammer. 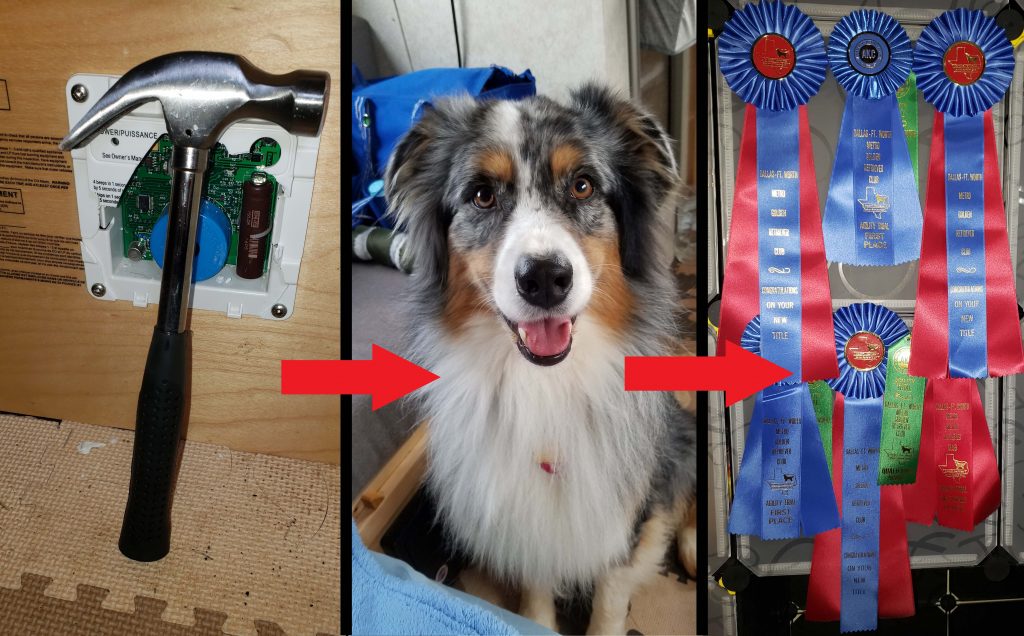 Shelby, We Miss You
An Engineer's Plan For Romance On Valentine's Day
Dessert Selection, A Description of One Engineer's Decision Process
The Solar Powered Chicken Coop Fan Project