The Royal Cobbler, A Fairy Tale For Small Business 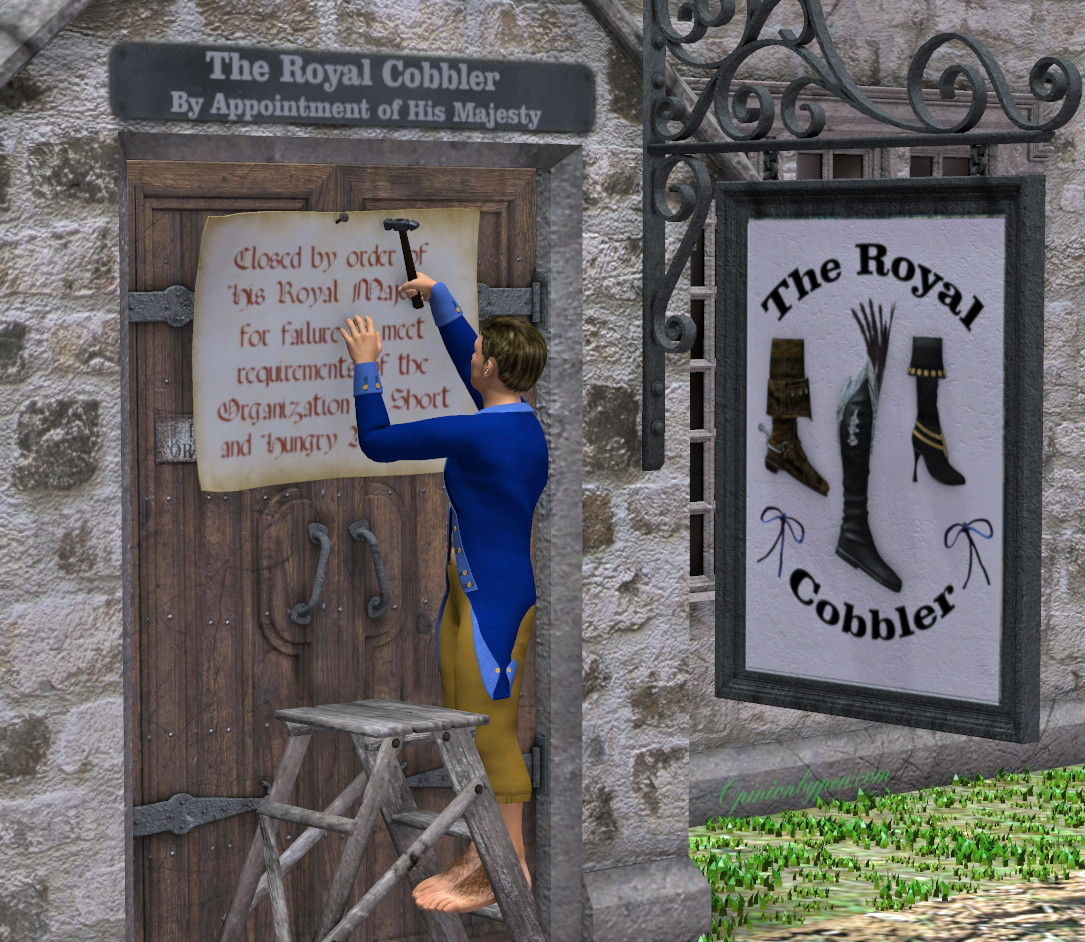 A long time ago there was a cobbler of great renown. He made a comfortable living selling very nice shoes to rich people. As luck would have it, word of his skills reached the king. The king being a very noble and wise king ( they always are, aren’t they) decided to see the cobbler’s shoes for himself.

That was almost double what he was making now and he would be making fewer shoes. Our hero quickly agreed.

The cobbler had just delivered his third pair of shoes when a dwarf entered his shop. The dwarf introduced himself as Borok, representing the king’s Internal Society for Order. Borok was there to do a routine audit to insure that the king was getting high quality. He then asked to see the cobbler’s processes for making shoes.

The cobbler took Borok on a tour of the shop and explained that he had been taught by his father, who had been taught by his father. Borok was unimpressed and told the cobbler he wanted to see written processes when he came back in two months. The cobbler had never learned to write so he had to hire his cousin to write the processes. He hadn’t anticipated the additional costs but he would still come out ahead.

By now the cobbler still had not gotten any money so he went to see the royal treasurer. The royal treasurer passed him to an underling, who passed him to an even lower level underling. The cobbler explained the problem. The underling seemed to want to help and asked for his kingdom vendor number and his invoice number. The cobbler needed to submit an invoice with each pair of shoes or he wouldn’t get paid. The clerk was able to help him apply for his kingdom vendor number.

The cobbler sighed and hired a part time accountant to keep his books. Trying to do business for the king was a lot of trouble and while the cobbler didn’t do accounting he was fairly sure he was losing money.

The cobbler was almost relived when Borok came back. Once he passed this audit he could stop paying his cousin. Borok actually smiled when he read the procedures. “Great” he said. “Now I only need to see proof that you’re following these procedures and we’re done.” In order to provide proof, the cobbler’s cousin became a full time employee writing down on paper as the shoes passed through each step.

When the troll entered his shop, the cobbler almost broke down. The troll introduced himself as Zubnr with the Elegant Products Assurance. He was there to audit the raw materials the cobbler used.

Zubnr had a long list of prohibited substances that the king was allergic to, so the cobbler would have to certify that he was using none of those materials. Since the King was royalty, he was very sensitive, so that would include the shops to both sides of the cobbler.

The king was also very fond of birds so the cobbler could use nothing that came from a bird. That would include the quill his cousin was using. The quill would have to be replaced with a charcoal stick. Zubnr also wanted a list of the cobbler’s suppliers to make sure none of the leather was from poached animals.

Zubnr said he would be back on a regular basis. The cobbler now had to hire another cousin to maintain the raw materials and to keep records of where he got them. Since this cousin could also do math, the cobbler had him take over the bookkeeping too.

While the cobbler was taking inventory in his shop (and the shops to both sides) he was late making the shoes for that month. This resulted in a Letter of Royal Displeasure and a warning that if it happened again the king would assign an agent to help ensure the cobble would be on time. Somehow the cobbler was sure the King’s agent would be very demanding and very little help.

We don’t know but most people telling this store agree that the hobbit was the last straw. The hobbit introduced himself as Bilbo (not that Bilbo) with the Organization for Short and Hungry Associates. Bilbo was there to make sure the employees were treated fairly and safely.

Bilbo looked around and told the cobbler that his shop was too small for three people. He would have to add another restroom and a break area. Where did he post all the required notices, did he have insurance for his employees, where were his records for mandatory training? He would have to add parking for at least three horses and a carriage. Bilbo only give him a month to take care of everything.

It was probably a coincidence that both Borok and Amborn entered the shop just as Bilbo was leaving. Coincidence or not, the cobbler scowled at the two, said “it’s all yours boys” and walked off.

Rumor has it that the cobbler spent his remaining years in another kingdom, making shoes for everyone but royalty.

It’s a good thing this couldn’t happen in America, nobody would do business here.

Teamwork, A Term Misunderstood By Congress
Victory Dance
An Engineer's Plan For Romance On Valentine's Day
The Importance of Teamwork in a Design