An Opinion On Opinions. Why The Other Guy Isn’t Always Wrong

With all the freedom and enlightenment our society is supposed to have, I find it amazing how little tolerance we have for someone with an opinion that differs from ours. Maybe the anonymity provided by the Internet reinforces this behavior, Twitter certainly seems to thrive on a crowd mentality. Still, I’ve seen a lot of people making fools out of themselves without the aid of the Internet.

Opinions are based on personal preference. Telling someone their opinion is wrong, idiotic or whatever your word of choice is, completely misses the point. My opinion can be based on a misconception of the facts but it’s still my opinion.

Telling me that I should share your opinion because it’s right does nothing to convince me that you’re right. In fact, I’m far more likely to clutch tighter to my own opinion simply because I feel threatened.

My Mother-in-Law is a very nice lady but they had to invent the term Apple Fanboy to describe her. Despite Microsoft’s best efforts to drive me into her camp, I still believe PCs are superior to Macs. I also believe that Android phones are superior to iPhones. Despite these fundamental differences, our Thanksgiving dinners are pleasant affairs without either of us feeling the need to explain why the other is too dumb to own a computer.

I firmly believe that Macs are under powered and overpriced. I have yet to see a commercial extolling the technological capability of the Macs. My Mother-in-Law firmly believes the PCs are ugly boxes and Microsoft is constantly rolling out updates because they can’t get it right the first time.

Rather than bombarding her with facts on why PCs are superior, I asked her why she preferred Apple and forced myself to listen rather than rebut on the first words out of her mouth. She wanted something that was sleek, artful and worked without forcing her to memorize arcane commands.

For her, Apple was perfect. I can’t argue that Apple produce beautiful machines and software with all the fluff that merely slows down an already slow system. My arguments on speed, power and function were worthless, she had her priorities firmly in mind.

I find that concept fascinating. We had very different opinions and yet both opinions were right, for us. It wasn’t that either of us were wrong, we simply had different criteria for forming our opinions.

How many times have I forced other people to listen to my opinions, shouted down their opinions and been completely wrong because we were using completely different criteria to form our opinions? Too often I fear.

Opinions are based on personal preferences. A priority for me is unlikely to be a priority for you. Telling you that your opinion is wrong simply because it doesn’t coincide with my opinion is a waste of time.

I will never convince my Mother-in-Law that my PC is better because it cost half as much as her Mac and has twice the performance. She’s looking at aesthetics and half the time, I don’t even have the cover on my PC. She’s right, Apple is far superior to the PC in appearance. Once I understood what she was looking at, it became obvious. Contrast the look and feel of Mac’s operating system to the clunky blockiness of Windows 10 and my opinion that PCs are superior to Macs is completely wrong. 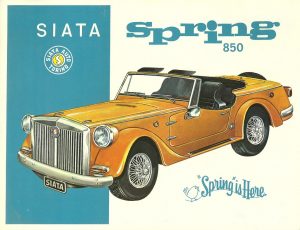 With that understanding, I can completely respect her opinion. Many years ago, I fell in love with a Siata Spring. The motor is in the back and smaller than most motorcycles sold today. In a time when performance was measured in zero to sixty under ten seconds, the Siata Spring did zero to sixty in slightly under sixty seconds.

My buddy already heavily invested in his own muscle car, an Oldsmobile 442, pointed out that he could go around the block in the time it would take me to get twenty yards from a stoplight. I didn’t care. I was thinking how good I would look once I reached cruising speed. Fortunately, the Siata Spring was out of my budget and I had to settle for a slightly more conventional car.

The next time you’re confronted with an opinion different from yours, don’t attack. Take the time to understand why their opinion is different. You might find out they have good reasons for their opinion. Then again, some of us are so insecure in our own opinions that we can only attack differing opinions. Heaven forbid the world realizes what a poor foundation we built our own opinions on.

It’s your choice. Me, I enjoy being able to look at a situation from all angles. Feel free to give me your opinion.

Tired Of Being Spied On? Support Data Gathering Taxes
Bell, Book and iPad
Makerspace for Young and Old Engineers
It's Absolutely Impossible For Us To Stop Being An Engineer