Wanted, a Women’s Magazine for the Rest of Us 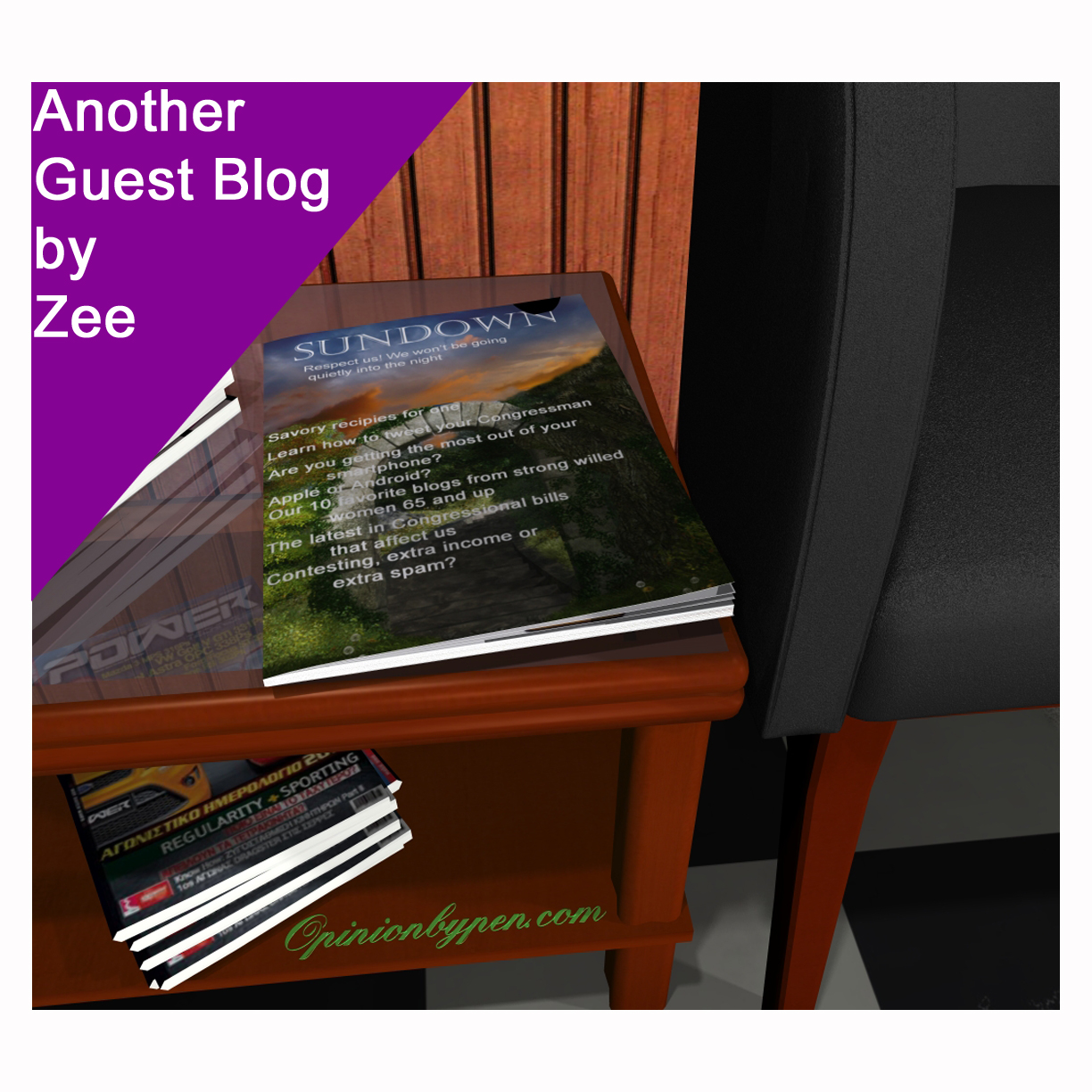 “Top Drawer” is fine because our flexibility to bend down to the bottom drawer isn’t what it used to be … but we still want to be acknowledged as important, but not “aged” or “senior” or “mature” or other dastardly names we’re called after we pass about the age of 60. Okay, not movie stars. They seem to never age and they still do graceful gymnastics at my age of 85.

I want a women’s magazine without advertisements for sexy perfume or gaudy makeup or the latest fashions. My morning shower keeps me refreshingly sweet smelling for my 85-year-old man-friend who eats onions so can scarcely smell vanilla, my favorite scent. My makeup time is nil and before you say it, yes, I look exactly as I am, even tousled hair if I forget to brush it after the aforementioned shower.

I like fact or fiction that features as the heroine an older woman who saves a young boy from drowning, feeds a hungry fire crew fighting a wildfire, takes on a great grandchild to raise, or starts a food bank for the starving. No gratuitous sex, no leaning on one’s husband or children.

I’d accept romance as it affects older women but preferably in the cuddling mode or watching TV holding hands.

I want a women’s magazine that has recipes for one person, two on special days when I’m entertaining. Crowds of guests are in my past, one guest is sufficient to hold my attention when I wish to be hospitable.

I don’t want menus that include caviar and champagne. Mostly I manage on Social Security so the costs have to be held down. Truth is, I like the food of my father, fried potatoes with onions, and pork chops, but I fancy spending one full day on a diet, there are so many exotic ones in the women’s magazines. Give us basic, nutritional foods that my doctor friend would appreciate. Certainly sweets, if just to savor the idea.

I want style appropriate for my age. Whether we work or we stay home, most of us have sufficient clothing to last about 30 years and we like it a lot better than the ultra-uptown outfits modeled in the present women’s magazines. They all seem to fit a size 10 or smaller and would humiliate us to be caught wearing them. Approach us with utility, beauty, sizes and ages of models that duplicate us for we‘ve discovered what we want.

I do wish to know about modern technology but only in one article on one subject a month, clearly written for me. I‘m not that techno-genius already immersed in 17 different ways to inform friends or be ugly to adversaries.

I want a magazine that features women from 60 to 117+ earning money doing what they enjoy, or if truth be told in some cases, working because they’re too limited on their SS after paying for housing, medications if any, transportation, and clothes to cover their bodies, to buy that all-too-necessary food.

I want an article on why we’re seeing an 11% inflation rate and Social Security insists on a 2.6 cost-of-living raise, if any. Companies boxing four fewer ounces in a container and raising the price 2.6 cents on the dollar is not a 2.6 raise.

I’d like one Senator, Representative or President, each issue, to write for the magazine, their goals, their beliefs, their reasons for approving or rejecting bills. I don‘t believe more than one politician an issue would be willing to discuss his or her reasoning, especially if that reasoning is bought and paid for.

I do want each state’s voting requirements listed as well as the Senators and Representatives and the President’s email and snail mail addresses listed in each issue. We top-drawer women must vote. We’re losing our freedoms too fast and at too great a rate to stay home even one voting day, as much as we’d like to ignore it or say our vote doesn’t count. We need to be encouraged to stay active in politics forever.

I want older women respected. I want all of the younger ones to know that my mother (and probably their mother) was the smartest person on earth, continuing to learn far beyond her years of industry.

Mother, after retiring from rearing children and helping raise grandchildren, learned to play card games new to her, having many a grand afternoon challenging other older (and younger) women with “one no-trump,” “rubber,” “dummy,” and other bridge words. Then, sticking on her poker hat, she‘d join the old men at their own game of penny-ante, bringing home a pocketful of wisely won pennies.

My grandmother was a horse whisperer, riding into the pristine Oregon hills before the lazy younger generations forced roads-of-ruin into them. She’d camp out a week or two, enjoying the aromas of firs and pines and of clear, uncontaminated lakes, watching the wildlife, the chipmunks with their bread-crumb stealing antics, the deer appearing to sail across meadows of wild flowers, the big lumbering bears fishing in the streams. She was 89 when she left this behind. Can you imagine her reading about diets, how to catch a man, accenting one’s eyes with black stuff, wearing oh-so-stylish high heels? No, never.

I believe an inspired top-drawer woman publisher with an editor of the same age could produce 12 glorious issues a year. They’d have a whole world of women to feature and a thousand companies ready to advertise in this ready-made market that prefers to shop at home. We spend money, too, but for much different items than the 20 to 50-year-old woman. Try us, magazine publishers, we’re worth it.

Passwords, We Have Way Too Many
What's The Infinity Mirror Aspect Of The Internet And Why Is It Bad?
An Attempt To Make Sense Of The Rules Of Writing
Using Data To Influence My Content, How Opinionbypen.com Changes