Once they hit the market, it was a given that sooner or later I would acquire one of the AI assistants on the market. The only thing holding me back was bandwidth and cost. When Google dropped the price on their mini and Amazon dropped the price on their Dot. I was unable to decide so I got both in order to do a comparison for Opinionbypen.  Around the same time, Folgers joined us.

I should mention Folgers is not an AI assistant, he’s an Australian Shepherd recently rescued from a puppy mill. He’ll be with us for a few months while he learns a few social skills, like how to be a dog. Why even include him in a review of AI assistants? Stay with me as I introduce the players.

The Google Mini is approximately the size of a flattened tennis ball. Set up is very easy but it does require a Smart Phone, home WiFi and an account with Google. I can’t vouch for the speaker quality because my 1.2 MBPS DSL line won’t support streaming music. Still, unless I’m doing a download at the time, Google is very responsive. For all of you folks worried about Google listening in and reporting everything you say to Google, the capability may be there but the bandwidth it uses suggests its only active when I say, “Hey Google”

The Amazon Dot looks for all the world like a Hockey puck. Like the Google Mini, the setup is easy but requires a smart phone, home WiFi and an account with Amazon. Also like Google I can’t vouch for the speaker quality because my DSL line won’t support streaming music. As a purely subjective observation, the Dot seems to have a little more trouble with my bandwidth issues but when I say “Alexa,” it almost always responds. 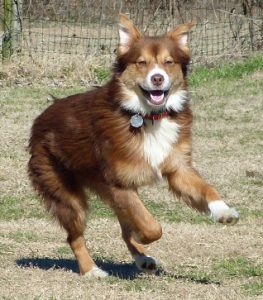 Folgers is a red Australian Shepard puppy. He spent the first six months of his life in a puppy mill before becoming a rescue and was never socialized. As near as we can tell he spent most of his time cooped up in a crate because when he finally got a chance to run, it was a series of hops instead of a run. There was also a very distinctive aroma about him that suggested his crate did not get cleaned out often. It may be the bath I gave him on arrival but he wants as little to do with me as possible. Although he’s never shown aggression, in the early days he would tremble whenever I got close. Just to be fair about it, he uses no bandwidth and almost always responds to his name.

Starting with the basics, I’m amazed at how well they can hear me. Alexa sits almost 30 feet away from me and responds to a conversational tone. Google is almost as sensitive. I think Folgers has them both beat because he can hear me open a bag of marshmallows from over 50 feet.

Both Alexa and Google provide a number of interactive games for entertainment and the list grows every day.  Folgers is learning to chase balls and is just beginning to understand that he has to bring the ball back for us to throw it.

Alexa and Google make it very easy to set timers and alarms. This convenience of function alone makes these assistants worthwhile.  My wife swears that Alexa was programmed by an engineer because she treats timers and alarms as separate entities. “Alexa set a timer for five minutes,” followed by “Alexa how much time do I have on my alarm?” will always result in Alexa saying, “You don’t have an alarm set,” and my wife growling. Not to be left out, while he doesn’t do timers, Folgers is very accurate about reminding us when it’s 6:30 in the morning (he has to go out) and when it’s 5:00 in the evening (dinnertime). He’s not nearly as versatile but almost as accurate.

Along with timers, there are reminders and lists. This is when I start to wonder how I managed before these assistants. “Alexa, remind me to put out hay for the horses tomorrow at 10 in the morning.” It works for trash day, for dental appointments, and even absent minded husbands. When it comes to lists, Alexa far outshines Google and Folgers. She allows me to create my own list categories, to do, shopping, technology, and so on. Google limits me to a shopping list. Coming in last for this category, Folgers is content as long as either Google or Alexa have dog food in their list. 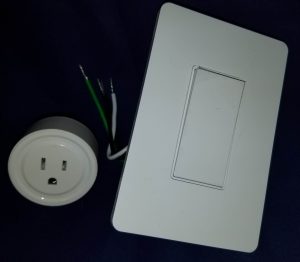 Home automation is another benefit of these digital assistants. Everywhere you look you see thermostats, switches and outlet plugs that work with Alexa and Google. Imagine being able to say, “Hey Google, turn off all the lights,” and have all the lights in your house go out. Sadly, at the moment, this is a pipe dream destined to disappoint.

Let’s look at a typical outlet plug first. These devices plug into your wall outlet and give you verbal control on anything plugged into them. In order to set it up you need to set up an account with the manufacturer of the device. Next you link that account to your Alexa or Google account.  Sounds simple, let’s go a little deeper.

Assuming you set this up properly, when you tell your AI assistant to turn all lights off you set off a long string of events.

In order for this to work, the device manufacturer has to maintain a reliable server. If the manufacturer’s server is less than reliable, so is your device. Worse yet, If they go out of business, your device is useless. And if you share my problem of limited bandwidth, you need to know that each device you add uses a tiny amount of bandwidth constantly reporting its status back home.

With all that, I was still excited when I realized I could replace all the light switches in my house with smart switches. Too bad that only resulted in more disappointment. A light switch typically only switches the hot line and the neutral line may never enter the junction box. Your smart switch requires a connection to both the hot and neutral lines. Electricians will be more than happy to help you, for a price.

I love being able to tell AI assistant to turn off my lights but since I’m limited to the two lamps that plug into the wall, I sometimes wonder if it wouldn’t be easier to teach Folgers to turn off the lights for me. In terms of frustration, Folgers wins this round.

Bandwidth usage remains an issue. When I added my second Amazon Dot, it took my network down for almost thirty minutes while it updated itself to the latest version.  As I add each device, switch or outlet, I know my already limited bandwidth is slowly being whittled away. Given the limitations on my DSL line, I’m amazed that they work as well as they do.

A few weeks with these devices and you realize that the artificial intelligence label is stretching it.  Their skills and abilities are the result of scripts generated by human programmers. The biggest claim these devices have to artificial intelligence is their ability to understand your speech and derive meaning from it. As my Wife will attest, if they were truly intelligent, Alexia would quickly understand timers and alarms are interchangeable when my wife is asking.

While he doesn’t have the large collection of facts at hand, Folgers exhibits more intelligence and learning capability than either Google or Alexia. When my Wife says come, he knows if she’s happy or mad and adjusts his speed accordingly.

More and more I find myself depending on Alexa. It’s not that the answers are better or more accurate. In fact, I tend to like the Google answers slightly better but Alexa is tied to my Amazon account.  Coming second place, Folgers will alert me when they are being delivered. Google seldom knows where my packages are.

If you want a companion for you or your children, Folgers is your best choice. He uses no bandwidth and only gets smarter with time. If you want something that will supplement and ease your busy day, either Google or Alexa will soon become indispensable. Their power consumption is minimal, bandwidth usage is low and they don’t need to be exercised. On the other hand, Folgers, despite being a refugee from a puppy mill and despite considering me the equivalent of an ax murderer, will provide companionship and all the love his heart can provide. Personally, I feel fortunate to have all three.

Your Incredible Power To Influence Technologic Evolution
How Did My Website Get Hacked?
Why Did Amazon Kill Amazon Explore? It Was Becoming Great.
How To Torture An Engineer, An Engineer's Wife Shows You The Way