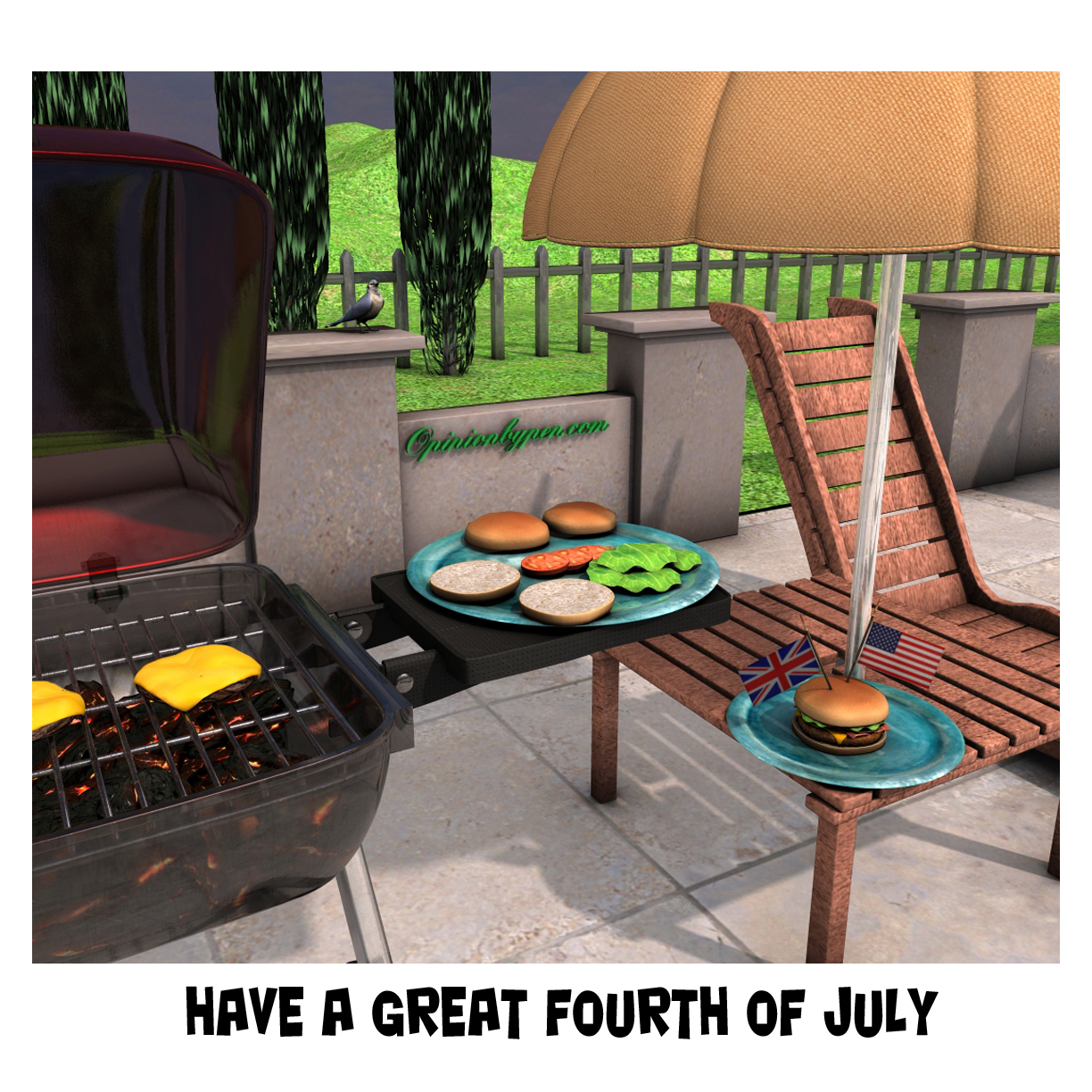 Today is the Fourth of July, a date celebrated by all Americans as the day we declared independence from England. Fireworks, backyard barbecues and massive sales are the highlights of this day. In making that declaration we said we were separating from the British Empire. I don’t want to turn history back but maybe we use a little more British influence in our current culture.

Sorry, I failed, for some reason no taxation without representation keeps coming to mind, I certainly don’t feel represented by our current political system. Do you?

I believe that July 4 is a day worth celebrating. I’m extremely grateful I was born an American but I also believe that we could still learn a few things from the British.

No, this isn’t where I discuss our slide into mediocrity and suggest we could learn a lot from how the British handled their own slide. I’m only saying that Great Britain still has many areas we might consider looking at.

Look at the British Parliament system. It’s not without its faults but it ensures representation without having to reach out to fringe groups. If you find yourself widely out of control you don’t have to wait two years for a minor course correction or four years for a major one.

Our current system seem more like a car going down the highway at 70 mph but you can only turn the steering wheel once every five minutes. I’m betting you’ll miss your turn off for gas.

Yes they still have to deal with the Monarchy and an archaic nobility system. We seem to have our own class of nobility in Hollywood and from what I’ve seen the British nobility is a lot better behaved.

That brings me to television. I’m an unabashed fan of British TV. I was insulted when I heard that episodes of Downton Abbey were being shortened for American audiances because we have a much shorter attention span. That belief might be a reflection of just how poor American television is rather than Americans.

It could also be that the short attention span of Americans is a rumor started by American producers to add more commercials. I admit having trouble really caring about the plot after seeing a commercial carefully crafted to make me forget everything but the sponsor’s product. There’s also the fumble with the remote to get the audio levels back to normal but I’m getting better at that.

How about “The White Queen?” In this movie they added a number of scenes for the American release. You guessed it, sex and nudity. Apparently, our producers don’t think we’ll watch anything without blatant sex and nudity.

In general, the British shows assume you’re willing to think. They force you to use your imagination and don’t feel they have to dumb it down for you. Fortunately for me not all British shows are educational and highbrow. One of my guilty pleasures in life is British comedy. There’s nothing highbrow about “Red Dwarf,” “Fawlty Towers,” “Are You Being Served” and “Black Adder” but they’re far funnier than what the networks try to feed us. (I consider “The Big Bang Theory” an exception but that’s also because it’s pointed directly at my own culture)

Still I can’t help but feel insulted when the networks keep pushing meaningless reality shows at us, because they feel we don’t like to think and we’re not able to stay focused long enough to get to the next commercial. Maybe that’s why we have so many commercials.

As I said earlier, I’m really proud to be an American but that doesn’t mean that The Declaration of Independence or the fact that we beat the British when we had home field advantage means we can’t learn a few things from them. I don’t want to detract from the Fourth but maybe we should take some time on July 5th to reflect on British culture. Take the time to watch a little BBC America. You might find it entertaining.

Before you accuse me of being a loyalist in disguise, let me just say that American cuisine is, in my opinion, far superior to British. That might be slightly unfair but really, Toad in the Hole? They do have great Indian food but if you consider imported foods, you have to allow some excellent Tex-Mex. On the home grown scene, while Southern cooking might be the death of me yet, I’ve yet to find its equal in Britain.

Speaking of food, my wife says the hamburgers are ready, Texas beef, home grown tomatoes, pepper jack cheese and a few jalapenos for spice. Time to go. Enjoy your Fourth.

Musings On A The Existence Of Parallel Universes
Using 1040 Advertising As A Revenue Stream, Why Not?
Imagination, It Allows Us To See The Impossible
Class Action Suits, A Way To Balance The Budget?