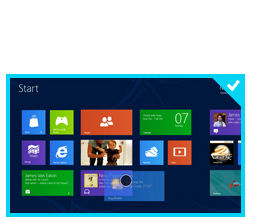 While it seems like a year ago, it was only a few months ago that one of the primary initiators for this blog happened.  Microsoft released the Windows 8 beta.

With the exception of Vista, I’ve always tried to use the latest version of Windows. When Microsoft released the Windows 7 beta, I tried it out and liked it so much I migrated it to my main computer. When they were getting ready to release I ordered three copies of it. I do still have two computers running XP but I’ve been very happy with Windows 7.

Enter Windows 8. After my experience with the Windows 7 beta, I was really looking forward to seeing all the new Windows 8 features.  Rather than attempt a dual boot system, past experience has taught me it’s a lot easier and safer to start with an empty hard drive. Because it was easily changed out, I replaced the hard drive on my work machine with a new drive. The installation went easily. Windows  even found drivers for my Wi-Fi card. This is usually hit or miss for  the various Linux installs I’ve done on this machine. So far so good. When it finally booted up for the first time there seemed to be something wrong with the graphics. They were really ugly and reminded me of the old VGA graphics. It was typical of the initial settings before the right graphics drivers are loaded . Imagine my surprise when I checked and realized this was high resolution,  Windows 8 was just that ugly.

I can see what they are trying to do with the Window. Instant status updates with just a glance. It’s not a new concept. Vista had it too, only they called them widgets at the time. Yes, I did have one computer running Vista. It was a laptop that came preloaded with Vista. I pulled off all the widgets I could. I saw them as nothing more than resource and battery hogs. Apparently a lot of other people did too. Widgets were all but dead in Windows 7. I’m not looking forward to having them come back.

After playing with it long enough, I was able to get it to a few screens that seemed familiar to Windows 7 but those offered nothing new. It seemed like I was having to do a lot of extra work just to do what I used to.

Microsoft is trying to do one size fits all but while Windows 8 will look the same on all the devices, not all the devices will be able to run the same programs. Talk about confusion.  Between my Android phone, my iPad and my Windows 7 computer, I’m fairly satisfied. I don’t need them to all look alike, each one has a different role in my life and I like it that way.

I’ve been wrong before and I’m sure I’ll be wrong again but I think it says a lot that I only played with Windows 8 for less than an hour before I pulled my hard drive and went back to XP. Since then I haven’t even considered trying it again or even checking for updates. I don’t know about the rest of the world but there is no Windows 8 phone, tablet or PC in my near future.

What does all of that have to do with my blog? After trying Windows 8, I told my wife I was so disappointed that I wished I had a blog to write about my experience.  I think it was the tone of her voice that said, sure but you’ll never actually do it. I never could resist a challenge.

Why Did Amazon Kill Amazon Explore? It Was Becoming Great.
Windows 10 Upgrade, Can You Trust Microsoft?
Why is An Engineer So Brutally Honest But Still Can't Read A Schedule?
VR Goggles, I Still Look Like A Geek When I Wear Them