When Did It Become Rude To Ask A Direct Question? 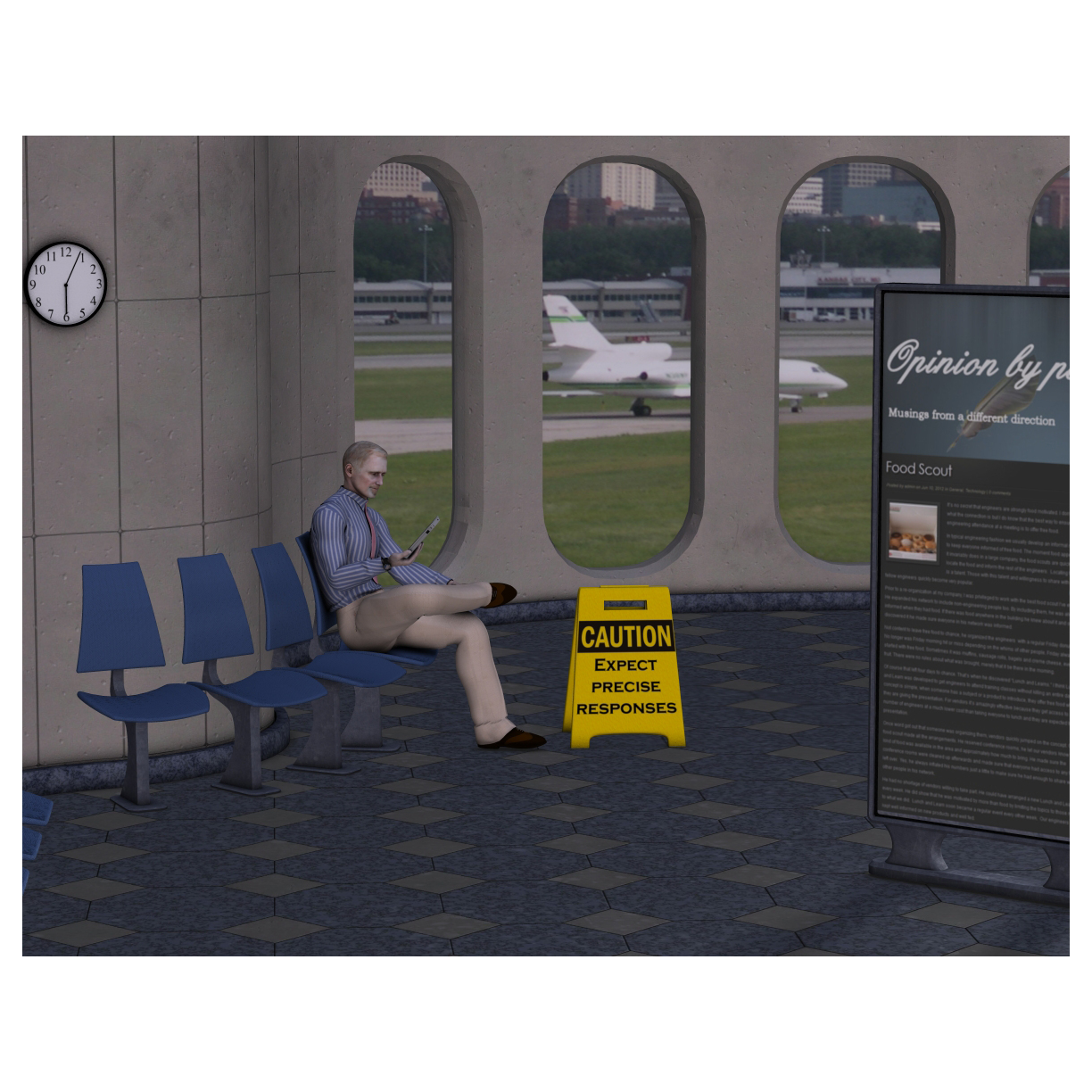 You’re sitting at the airport terminal reading your Kindle when someone comes up to you and says,   ”Pardon me but do you know what time it is?” If you’re like me, you look up, answer “Yes” and go back to reading. Rude? Maybe but which of us was being rude?

We can infer that the stranger wanted to know what time it was but there seems to be some mistaken belief that it’s impolite to ask a direct question. I often feel I need to hunt down that fine purveyor of manners and have a long discussion with them.

This is one time I don’t claim to represent the engineering community at large. My feelings are related to my being an engineer but it’s more of a personality quirk, a very common quirk.

You see, time is very important to me. I really have a thing about efficiency when it comes to time and this person is trying to waste my time. Don’t get me wrong, I waste a lot of time on my own. At one time, I could have drawn a complete map of Norrath from memory. I’ve spent way too much time playing on-line RPGs. But that was my choice.

There’s a secondary motive here too. Many of the issues I fix are caused by someone not being clear in their communications. If the person in question wanted to know what time it was, he should ask me, “What time is it?” Not hint that under the right circumstances, my vocalization of the current time would be worthwhile knowledge to him, without of course, placing him under any obligation to return a favor. Direct communication is very important. It’s one of the best ways to avoid misunderstandings.

Why then do we have people running around persuading people it’s bad manners to ask direct questions? I find it hard to believe but there’s an entire group of people that prefer it if you just sneak up on the question. Whatever you do don’t be direct. When I first heard this, I thought these people were myths or legends like Bigfoot and Nessi.

Sadly, I was wrong. The more outgoing these people are, the more they view any discussion as a potential for social interaction. It stands to reason that these are the same people writing the guidelines on manners. As outgoing people themselves, they want to encourage interaction.

What’s the poor person in the middle to do?

A long time ago my company offered a solution. They had us take personality tests and then issued badges with a color representing your predominate personality trait. As I said it was a long time ago, I suspect it was discontinued because people felt they were being profiled or categorized.

For me, it worked wonders. I could look at someone’s badge and see I’d better ask them about their son before I asked any real questions. They could look at my badge and realize they had about thirty seconds to ask their question before I tuned them out. This was great, minimal time was wasted on unnecessary social chitchat.

I’ve often wondered why this practice was discontinued. I suspect that the people encouraging “good manners” were horrified to see less than half of us wanted to be social. In their minds, this was only encouraging bad manners.

I’ve thought about this and I think we need to bring this practice back. Not with my company but with the entire population. I thought about a t-shirt but I don’t wear t-shirts (another personal quirk, not related to rumors of a CPU tattooed on my arm). I considered a button that reads “I’m an engineer, I give precise responses”  My wife pointed out that this would be self-defeating because it would be used to start the very conversation I’m trying to avoid.

This is unfortunate because I’ve used most of my allocated time in the TSC (Thought Simulation Chamber) this month to consider problems at work. And so, I turn to you, my reader. Aside from wearing a Hannibal Lecter mask while sitting at the airport (I can foresee that going really bad), how can I encourage that stranger to come out and ask “What time is it?” Direct responses welcome. 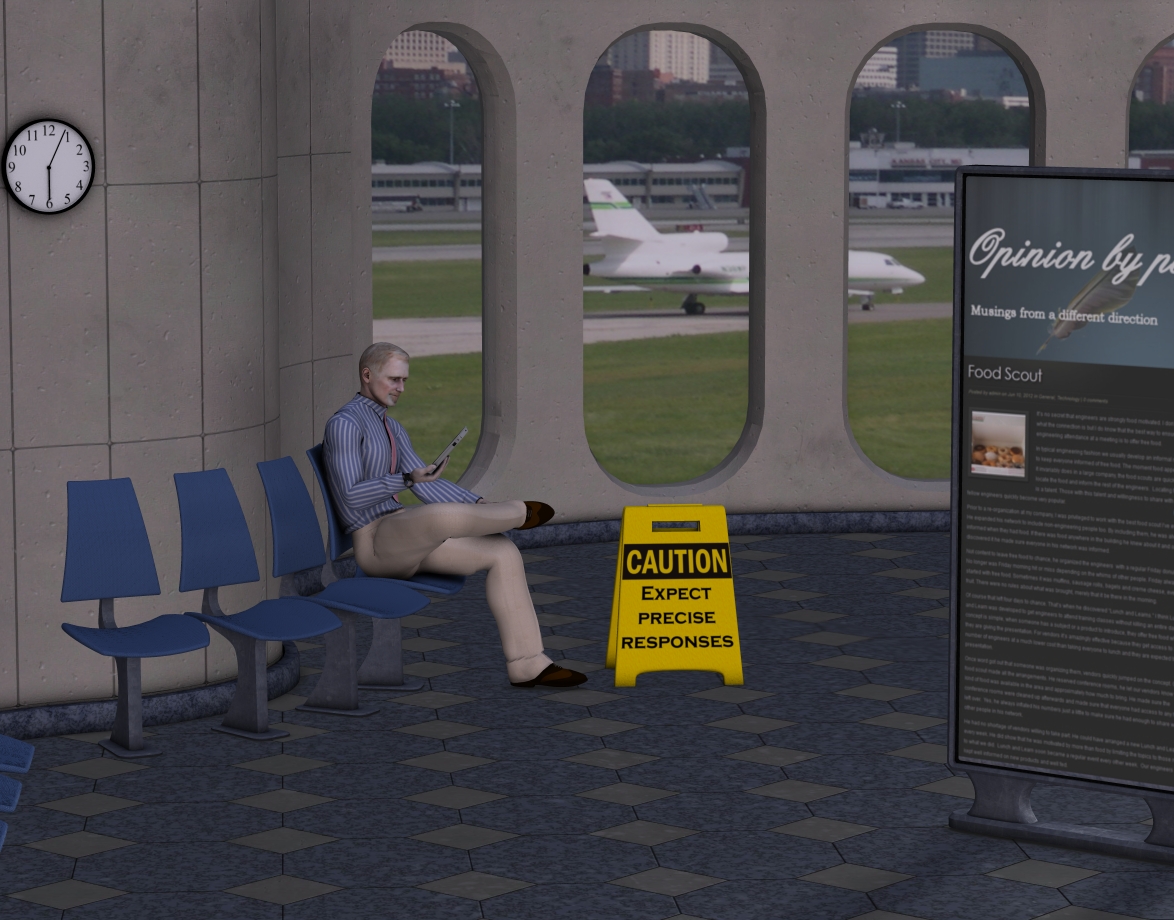 A Sense Of Community, We Need To Thank Those People!
Whimsy, This Engineer's Stress Relief
A Study in Communication, Webhostinghub
WW2 and Hacked Email Accounts